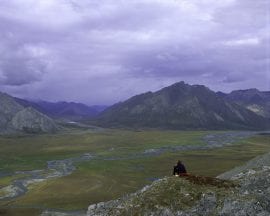 On September 9, 2020, the Native Village of Venetie Tribal Government, Arctic Village Council, and Venetie Village Council (collectively “the Tribes”) filed a lawsuit against Secretary of the Interior David Bernhardt and the Trump Administration to protect the Coastal Plain of the Arctic National Wildlife Refuge, known to the Tribes as Iizhik Gwats’an Gwandaii Goodlit, the Sacred Place Where Life Begins, from oil and gas development.  Today’s suit represents the latest in a decades long effort by the Tribes to protect the Coastal Plain, a region of incredible cultural and religious significance to the Tribes and their people.  Fifteen state governments, led by the State of Washington’s Attorney General Bob Ferguson, stood alongside the Tribes today by filing a separate lawsuit that seeks to preserve this national treasure and protect their states’ interests combating climate change and protecting migratory birds.

After filing the suit in the federal District Court for Alaska, Native Village of Venetie Tribal Government First Chief Margorie Gemmill stated, “The Coastal Plain is one of the most important natural, cultural, and subsistence resources to the Neets’ąįį Gwich’in of Arctic Village and Venetie and to the Gwich’in people as a whole. The cultural identity of the Gwich’in people as caribou people is intertwined with the Porcupine Caribou Herd’s calving areas in the Coastal Plain. Any impacts to the Porcupine Caribou Herd from changes in migration patterns, lower fertility rates, and loss of habitat will have significant adverse social, cultural, spiritual, and subsistence impacts on our people.  This process must be stopped.  As tribal governments we will defend the rights of our people at all costs.”

First Chief Galen Gilbert of the Arctic Village Council stated, “Our people are united in the defense of our way of life.  As tribal governments, we have a responsibility to our citizens to defend this sacred place.  I am thankful we are joined in this effort by other state governments who likewise share this duty of responsibility to their people. Together, we will protect this sacred place.  Not only for the Neets’ąįį Gwich’in, but for all Americans.”

Elder spokesperson for Native Village of Venetie Tribal Government Sarah James stated, “As Neets’aii Gwich’in, our biggest concern is our way of life and who we are. From the beginning of time, we’ve depend on caribou for our way of life. We take care of the caribou, and in return, they take care of us, and that’s really important to my people. And this—the coastal plain—is the heart of the Arctic National Wildlife Refuge, not only for caribou, but for many other animals who are born there and raise their young there because it’s a safe place away from predators. It’s a place we call Iizhik Gwats’an Gwandaii Goodlit. That means the ‘sacred place where life begins.’ And it should be kept that way because there’s no other place they can go to. It is the core of the caribou existence and Gwich’in existence.”

Read more about the Gwich’in peoples fight to save their homelands in the Arctic National Wildlife Refuge.