The agreement follows a May 2022 federal court decision ruling that the state committed numerous NVRA violations. Commonly known as the Motor-Voter law, the NVRA requires driver’s license offices and public assistance agencies to provide voter registration services to their clients during applications, renewals, and change of address requests, both in-person and remote.

The agreement, negotiated on the plaintiffs’ behalf by the Native American Rights Fund (NARF), Demos, Wardenski P.C., and Terry Pechota of the Pechota Law Office in Rapid City, requires the Secretary of State to designate a statewide NVRA coordinator who will ensure statewide compliance by the agencies through mandatory training and monitoring. 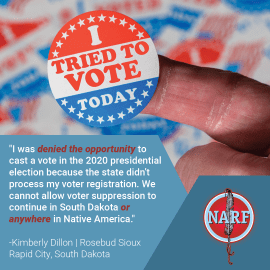 “Ignorance will no longer be an excuse in South Dakota as the agreement specifies the state must create guidance, ensure accurate training materials, and actually train state agency staff on Motor-Voter responsibilities,” said plaintiff, voter, and McLaughlin city council member Hoksila White Mountain, who witnessed Native people disproportionately turned away on election day in 2020 because local offices had not properly registered them to vote.

“This settlement brings victory to Native people seeking to register to vote in South Dakota, and to all voters who support fair U.S. elections this year and in the future,” said voter and Lakota Peoples’ Law Project Co-Director Chase Iron Eyes.

NARF Staff Attorney Samantha Kelty agreed: “South Dakota has a long history of denying and suppressing Natives’ right to vote. With this agreement, the state promises to end practices that allowed disenfranchisement of Native voters.”

Demos Senior Advisor for Legal Strategies Brenda Wright called the settlement “long overdue,”: “In other states, the Motor-Voter law has been instrumental in getting eligible people registered for over 25 years. We welcome South Dakota’s decision to accept Judge Piersol’s ruling and implement these important reforms. Ensuring that all eligible South Dakotans, particularly Native Americans who have been systemically disenfranchised by the state, have the right to vote puts us a step closer to realizing a more just, inclusive, democracy.”

“It should not have taken a lawsuit to ensure South Dakota’s full compliance with the NVRA, a nearly 30-year-old law that has expanded voter registration opportunities in states across the country,” said Joseph Wardenski, founder and principal attorney at the Brooklyn, N.Y.-based civil rights law firm Wardenski P.C. “The comprehensive agreement we reached with South Dakota is a roadmap that every state should follow in complying with this law.”