Home / About Us / Samantha Kelty 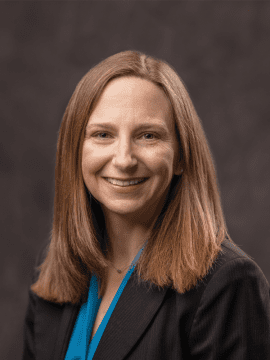 Samantha Kelty is a Staff Attorney with the Native American Rights Fund in its Washington, DC, office.  Samantha litigates to eliminate obstacles to voting faced by Native Americans.

At NARF, she has successfully litigated or settled three major victories for Native American voting rights, including securing ballot assistance in Montana and Nevada, ballot receipt extension deadlines in Nevada, and on-reservation polling places in Montana and Nevada.    She also represented amicus curiae National Congress of American Indians before the United States Supreme Court in advocating for the use of ballot collection and equal access by Native American voters under Section 2 of the Voting Rights Act.  In addition to litigation, she is a member of the Native American Voting Rights Coalition, a nationwide alliance of advocates, lawyers, academics, and tribal representatives that addresses Native American voting issues nationwide.  During the 2020 election cycle, she negotiated for on-reservation voting services for Tribes in Montana and was a member of an on-call election day team (866-OUR-VOTE) for all voting issues in Indian County.

She was recently featured on NPR regarding COVID-19 being yet another obstacle to casting a vote in Indian Country.  She is currently focusing on redistricting in a major, first of its kind project in Indian Country consisting of public education, attorney training, developing redistricting proposals, and litigation, all with the goal of removing barriers to voting in Indian communities.

Samantha started her career at DNA-People’s Legal Services representing low income clients in public interest matters, after which she was in private practice for over 15 years representing tribal schools and other tribal entities in employment, administrative litigation defense, and other general counsel services.