Home / Civil Rights (Voting Rights, Juries, Census) / We Have Every Right to Vote

We Have Every Right to Vote

Today is National Voter Registration Day, and we have one message for you: there is no such thing as not voting. Choosing not to vote is itself a choice. It is a choice to give your power to someone else to decide for you. It is a choice to give in to someone else’s view of you and how you should live your life. It is a choice that says “you choose for me,” as though you are deciding on a flavor of ice cream. And this is a dangerous choice, because that other person might not have your best interests at heart or care about you at all. 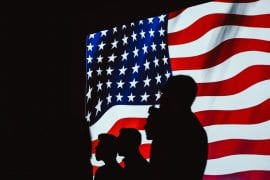 Photo by Brett Sayles at Pexel.

We get it. It’s a colonialist system, not one that our Nations created, but one placed on us. In 2017, NARF helped complete a study that showed voter turnout in tribal elections is 20 points higher than in federal or state elections. This is because tribal members feel more a part of their own system than they do the “other” system and simply trusted their own governments more. It is also because for years states gave insulting and degrading tests to Native Americans forcing them to prove they were “competent” or “civilized” to vote. This propaganda was designed to make Natives believe that they had no place in the American system. That Native communities feel disconnected from state and federal government is not a surprise to anyone who has paid any attention to history or modern federal Indian policy. It is also a lie. Native Americans have every right to vote and every right to use the power that comes with voting to protect Native American sovereignty.

The court system is also part of that “other” system, and we as lawyers deal with it every day. We do it because sometimes we win. More often than you might think. And when we do, we turn that system to our own advantage. Imagine if those fighting pipelines or voter suppression or trying to enforce treaties just said, “we could sue, but I refuse to take part in that system.” What would happen? There would be more pipelines and voter suppression and no one to enforce the treaties.

Our point is that you have to fight. Choosing not to vote is choosing to sit out this battle. Which is exactly what they want you to do. Because lower voter turnout in Indian Country means less power for Tribes. That is the perfect result for those that would oppress the Tribes, deny resources, break treaties, and suppress our vote. So while we hear you, we  feel you when you talk about colonialism, about how nothing ever changes, about how it can be really hard to vote. Tell us about it—we have your back.

But we also humbly ask that you have our back too. We want you to think about it this way:

Vote because they don’t want you to.

Vote as an act of rebellion.

Obstacles at Every Turn: Barriers to Political Participation Faced by Native American Voters. Available at https://vote.narf.org/obstacles-at-every-turn/