In 2017 and 2018, the Native American Voting Rights Coalition—founded by the Native American Rights Fund—held nine public hearings to better understand how Native Americans are systemically and culturally kept from fully exercising their franchise. More than 120 witnesses testified from dozens of tribes across the country.

The final report, Obstacles at Every Turn: Barriers to Political Participation Faced by Native American Voters,  was released June 4, 2020, and provides detailed evidence that Native people face obstacles at every turn in the electoral process: from registering to vote, to casting votes, to having votes counted.

Some of these findings affect non-Natives as well. Many are particular to the Indian Country experience in 2020. Some were put in place specifically to suppress turnout.

Download a summary of the report’s findings including recommendations for a way forward. 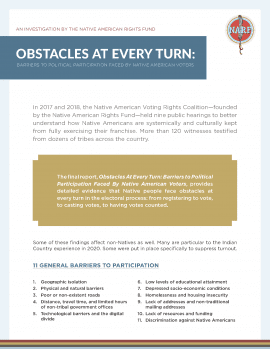 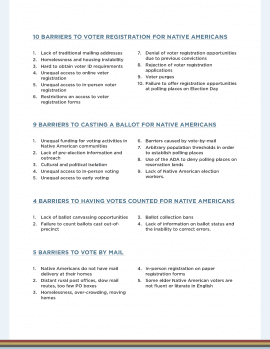 9 BARRIERS TO CASTING A BALLOT FACED BY NATIVE AMERICANS

4 BARRIERS TO HAVING VOTES COUNTED FACED BY NATIVE AMERICANS

6 BARRIERS TO VOTE BY MAIL FACED BY NATIVE AMERICANS

In the United States, power is available through participatory democracy. If Native Americans can engage fully in the political system—free from the barriers that currently obstruct them—they can reclaim power and participate in America in a way that is fair and just.

The first critical step: Congress must pass the Native American Voting Rights Act, or its component pieces in other legislation. This bill will ensure that Native Americans have access to political participation by starting to address the obstacles outlined in this report. For example, mandating polling places on reservations will cut down travel time and allow Native American voters to cast a ballot in a familiar place free from discrimination.

Local election officials should reach out directly to tribes to consult about placement of vote centers with registration opportunities and polling places within Native communities and recruit Native American community members to work as poll workers and local election officials. For vote by mail specifically, election officials should ensure safe curbside voting and ballot drop boxes, and deploy mobile registration and voting stations. Election day postmarks should be accepted as the norm, as should postage-paid ballots. Third parties should be allowed to collect ballots and drop off completed ballots, and there must be a process for rectifying signature match issues.

Tribes should encourage their members to participate in state and federal elections as a way to increase political power, reach out to and work with county officials to increase voter access for their members, and issue voter guides to de-mystify voting processes and ballot initiatives that affect the tribal community. Tribes should make voter registration for state and federal elections available in all tribal buildings and encourage registration at every point of contact with tribal members.

Tribal citizens should register and vote, and encourage their families and friends to register to vote. They should arrange voter registration drives and reach out to their tribal governments expressing enthusiasm for get out the vote efforts.