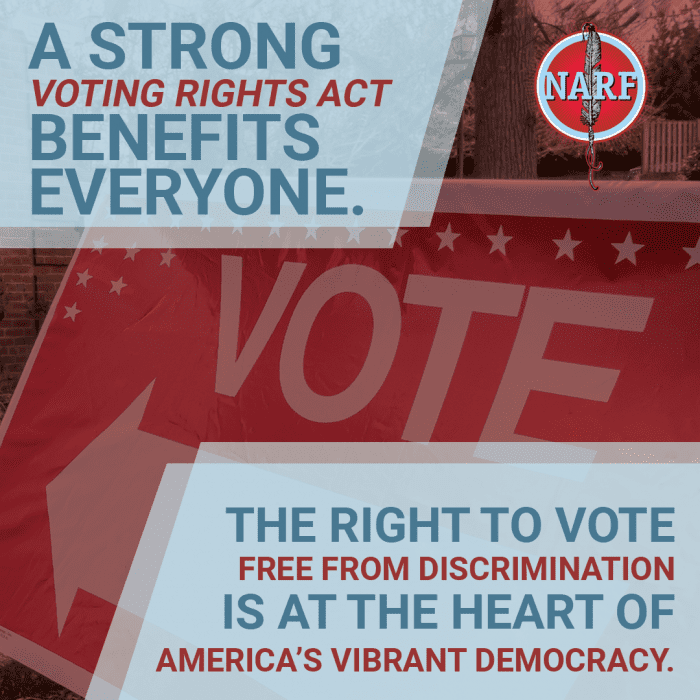 On July 1, 2021, the U.S. Supreme Court released a decision in Brnovich v. DNC that upheld two Arizona voting policies that make it harder for people—and especially people of color and Native Americans—to vote.

NARF Staff Attorney Jacqueline De León reacted, “Today’s decision acknowledged the inequitable burden created by Arizona’s laws, including specifically upon Native voters, but indicated that it was not inequitable enough to matter. Since when have our American ideals been that discriminatory policy is okay as long as it is just a little discrimination? It is now up to Congress to clearly defend the ideal that every vote and every voice counts.”

The policies that the court affirmed today adversely affect Native American communities in Arizona, which face specific obstacles in voting. First, the decision to discard ballots that are  submitted in the wrong precinct especially affects Native voters whose communities with well-known, traditional boundaries do not match up with the state-dictated precinct boundaries. These communities do not have access to vote centers that would allow Native voters to cast a ballot out of precinct like the majority of the rest of the state. Second, the decision to criminalize ballot collection adds one more hurdle for Native voters who often carry ballots for friends and family because they live in remote regions on dirt roads, have limited transportation options, and lack home mail delivery. These laws took advantage of structural disadvantages within Arizona’s Native communities to create barriers that will specifically affect Native voters.

The National Congress of American Indians, represented by NARF, filed an amicus brief in Brnovich to address these issues. NARF is committed to protecting the voice and power of Native American voters. Learn more about our work at vote.narf.org.

At about 17 minutes into the hearings, Justice Sotomayor addresses the voting burdens in Native communities. The points that Justice Sotomayor raises, echo those found in the National Congress of American Indians’ (NCAI) “friends of the court” amicus brief in the case. NCAI’s brief, which was filed by the Native American Rights Fund in January, explains how American Indian and Alaska Native voters face substantial obstacles and documented discrimination as they try to participate in the American democratic process.

Native Americans are entitled to full access to the political process, but failures rooted in devastating policies and discrimination create needless barriers to the ballot.  Services such as post offices and drivers’ license sites require hours of travel, postal delivery and residential addressing is insufficient or completely absent, poorly maintained dirt roads become impassable during November election season, lack of internet and cell phone coverage abound on reservation, and insufficient economic means and transportation make it impossible to access basic government services. There also have been instances of untrustworthy election officials capitalizing on these inequities to disenfranchise voters and undermine Native American political power.  Section 2 of the Voting Rights Act provides much needed protections against this type of systemic voter disenfranchisement and must be upheld.

“Working with Native communities across the country, we have witnessed time and again discriminatory barriers to voting. This case is an opportunity for the US Supreme Court to uphold our democratic values and legal safeguards that protect every citizen’s right to vote,” explains NARF Staff Attorney Jacqueline De León.

Read more about the barriers that Native American voters face in the report, Obstacles at Every Turn: Barriers to Political Participation Faced by Native American Voters.