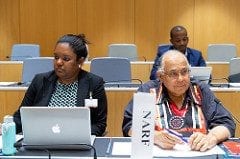 A Diné prayer song captured in a hip-hop hit. A “tribal” design wrapped around a trendy duffel. Who owns these traditional and cultural expressions? How do they fit into our Western framework of intellectual property? How can we protect traditional knowledge without making it even more available for exploitation?

The US Department of State delegated authority for these negotiations to the U.S. Patent and Trademark Office (PTO), but neither the PTO, the State Department, nor any other federal agency had ever consulted with American Indian and Alaska Native tribes on this matter. At its 2016 Annual Convention, the National Congress of American Indians (NCAI) passed a resolution calling for such consultation. NARF represents NCAI in negotiations to protect indigenous peoples’ intellectual property through these developing international instruments.

The PTO and other federal agencies conducted listening sessions with tribes in 2017, and in May 2017, NARF and the University of Colorado Law School (CU) hosted a major drafting session on the WIPO TCE instrument. With NCAI’s approval, NARF took a proposed draft of new TCE provisions to the 34th WIPO session in Geneva, Switzerland, in June 2017. The WIPO Indigenous Caucus approved the draft and some of the text from it was introduced into the WIPO draft TCE instrument. NARF and NCAI continue to refine and promote the TCE instrument language, and have also turned their attention to the WIPO TK and GRAATK instruments. Another drafting session was held at CU in May 2018 to prepare for the IGC 36th session to be held in June 2018.

NARF Staff Attorney Sue Noe attended that 36th session and, on June 25, 2018, served as a speaker on the Indigenous Panel on the topic of “Practical Measures Relating to Intellectual Property and Genetic Resources: Databases and Contracts – Indigenous Peoples’ and Local Communities’ Perspectives.” Ms. Noe served on the opening Indigenous Panel, along with co-panelist Mr. Aleksey Tsykarev, Member and Former Chairperson-Rapporteur of the United Nations Expert Mechanism on the Rights of Indigenous Peoples, and her presentation dealt with specific examples and issues related to practical measures, such as databases and contracts, for the protection of indigenous peoples’ genetic resources and traditional knowledge. 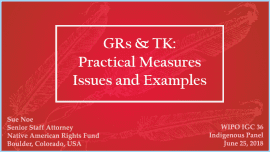 Specifically, Noe described some of the recent experiences of the Penobscot Nation and the Karuk Tribe, both of whom are actively working to protect their tribes’ traditional knowledge, cultural heritage, and intellectual property rights.

Like the Penobscot Nation, the Karuk Tribe has also worked for decades on intellectual property and cultural heritage preservation efforts, collaborating with academic institutions to create a multi-faceted intellectual property toolkit that protects the Tribe’s resources and provides a framework for acceptable ways of sharing information. The Karuk Tribe has developed guiding principles that govern collaborations and research related to the Tribe. They include free, prior, and informed consent, confidentiality, self-determination, and other principles recognizing that the Tribe retains prior proprietary rights over its traditional knowledge and cultural and natural resources and that the Tribe is the primary legal and cultural custodian in any projects or activities that produce intellectual property products.

As part of Noe’s presentation, Lisa Hillman, Pikyav Field Institute Project Manager (Karuk Tribe) spoke to the issues that the Tribe encounters in its efforts to ensure intellectual property protections for the Tribe’s cultural heritage:

In late August 2018, Noe joined NCAI representative Frank Ettawageshik at the 37th IGC session, where Mr. Ettawageshik served as co-chair of the Indigenous Caucus. It was the first of four sessions that will deal with Traditional Knowledge and Traditional Cultural Expressions.

IGC’s objective  is to reach an agreement on one or more intellectual property-related legal instruments for the protection of traditional knowledge (TK), traditional cultural expressions (TCEs), and genetic resources and associated TK (GRAATK).  Text-based negotiations have been underway at the IGC since 2010.  Presently there are three draft texts under negotiation, one on each subject matter.

IGC 40 was the fourth in a series of sessions focused on the TK and TCEs draft texts. The three prior sessions on these texts were in August and December 2018, and March 2019.  At the suggestion of the IGC Chair, IGC 40 looked at the scope of protection to be provided in the instruments and the potential exceptions and limitations to the protections that might be allowed. For example, negotiation issues included:

The meeting produced revised texts, which were approved by the Committee’s member states as the basis for future negotiations. However, the texts continue to include various alternative provisions reflecting member states’ differing positions on these and other issues.

The IGC operates on two-year mandates and because this meeting was the last session of the 2018-2019 biennium, IGC participants also had to negotiate a mandate and work program for the next biennium. Noe was selected by the Indigenous Caucus to represent the Caucus in small group negotiations with member states’ regional coordinators on the 2020-2021 mandate and work program.  In this role, she was able to bring to the table recommendations to WIPO from the UN Permanent Forum on Indigenous Issues (UNPFII).  At the 18th Session of the UNPFII in April 2019, which addressed the theme of “traditional knowledge,” Noe coordinated with other WIPO IGC Indigenous Caucus participants to request UNPFII make various recommendations to WIPO related to the IGC negotiations.

Based on the UNPFII recommendations, IGC 40 recommended to the WIPO General Assembly that WIPO commission the updating by an indigenous expert of the Technical Review of Key Intellectual Property-related Issues of the WIPO Draft Instruments on Genetic Resources, Traditional Knowledge and Traditional Cultural Expressions, which was prepared by former UN Special Rapporteur on the Rights of Indigenous Peoples, James Anaya, in 2014.  IGC 40 also recommended that WIPO organize an Indigenous Expert Workshop to take place during the 2020-2021 biennium.  Additional work remains to be done on the UNPFII recommendation related to WIPO funding for Indigenous participation at the IGC negotiations.

Renewal of the IGC mandate for the 2020-2021 biennium and approval of the recommendations of IGC 40 will be taken up by the WIPO General Assembly at its annual meeting to be held September 30 to October 9, 2019.  Under the program of work recommended by IGC 40, the next IGC session will occur in February or March, 2020, and will address the GRAATK text.