Changing Currents, from Affiliated Tribes of Northwest Indians, envisions a tribally-led water movement to ensure the health of our people and preserve our ways of life for many generations to come.

Represented by NARF, the Klamath Tribes’ water rights were recognized in 1983 in United States v. Adair, but the courts left quantification of the water rights to Oregon’s Klamath Basin Adjudication (KBA). After finishing the KBA’s 38-year administrative phase, the Tribes were able to enforce their water rights for the first time in 2013. The Klamath County Circuit Court is now reviewing the Oregon Water Resources Department’s (OWRD’s) Findings of Fact and Order of Determination (FFOD) issued in the KBA.

In 2017 and 2018, the Klamath County Circuit Court resolved jurisdictional and other legal issues as well as general procedural issues. Importantly, the court issued rulings limiting discovery and the introduction of new evidence, preventing a complete do-over of the administrative proceedings. However, the court ruled that a de novo standard of review would apply, in which the court will “look anew” at the determinations of OWRD in the FFOD and may give deference to OWRD’s determinations.

Now the KBA is in Phase 3, which addresses the substantive exceptions filed to the individual water right claim determinations in the FFOD. Part 1 of Phase 3 addresses crosscutting legal issues applicable to multiple claims. Two of three claim groups were resolved in 2019. Opening motions for the third claim group (tribal claims) were filed in December 2019. Briefing and oral arguments occurred throughout 2020 and we await the judge’s ruling.

KBA Phase 3 Part 2 began in December 2020. The Court will schedule motions to introduce non-record evidence in the Tribal Group C claims once it has issued its Phase 3 Part 1 rulings related to these claims.

On Wednesday, February 24, 2021, in an order from Klamath County Circuit Court Judge Cameron F. Wogan, the Oregon court again affirmed the Klamath Tribes’ water and treaty rights. Wednesday’s order rejected attacks on the Tribes’ water rights determined by the Oregon Water Resources Department (OWRD) during the administrative phase of the Klamath Basin Adjudication (KBA), affirmed the senior priority date of the Klamath Tribes’ water rights in the Klamath Basin, and upheld the need to maintain a healthy and productive habitat to meet the Tribes’ treaty right to fish, hunt, trap, and gather.

Klamath Tribes Chairman Don Gentry responded to the order, “We are pleased that Judge Wogan upheld the rulings from the administrative phase of the KBA. He reaffirmed that the 1864 treaty entered into between the Klamath Tribes and the United States reserved to the Tribes sufficient water to keep our fisheries and other aquatic resources healthy so that we can protect our natural resources and cultural traditions.”

NARF Staff Attorney Sue Noe explained, “Judge Wogan correctly affirmed quantification of the Tribal water rights based on the habitat needs of the fish, wildlife, and plants. Although he ruled that opponents of the Tribal rights will have another chance to try to reduce the amounts by showing the Tribes don’t need all the water awarded by OWRD to meet their livelihood needs, Judge Wogan made clear in no uncertain terms that the amounts cannot be below what is necessary to provide healthy and productive habitat.”

Importantly, like all other courts that have considered the issue, Judge Wogan ruled that the Klamath Tribes’ water rights extend to Upper Klamath Lake. Upper Klamath Lake forms part of the border of the former Reservation and provides critical habitat for the endangered c’waam and koptu (Lost River and shortnose sucker fish), which are sacred fish species traditionally harvested by the Tribes.

Represented by NARF, the Klamath Tribes successfully achieved recognition of their treaty-reserved water rights in federal court litigation in the 1970s and 1980s in United States v. Adair, but the federal courts left quantification of the water rights to the state adjudication in the KBA. After the successful conclusion of the KBA’s 38-year administrative phase, the Tribes were able to begin enforcing their water rights for the first time in 2013. The administrative determinations are presently on review in the Klamath County Circuit Court and Judge Wogan’s ruling is the latest to come out of that process.

An important milestone in the Klamath Tribes’ effort to secure their treaty-reserved water rights was reached on April 16 with Administrative Law Judge Joe L. Allen ruling in favor of quantification of the Tribes’ water rights for two water sources, the Klamath River and Klamath Lake, in the amounts claimed by the Tribes and the United States, Bureau of Indian Affairs as trustee for the Tribes.  The rulings were a resounding victory as they adopted, across-the-board, the water amounts sought by the Tribes, and confirmed, once again, that the Tribal water rights are the most senior in the Basin. The Proposed Orders add to six earlier victories achieved by the Tribes in December 2011 – for Tribal water rights in the Williamson, Sycan, Sprague, and Wood Rivers, the Klamath Marsh, and in 140 springs scattered throughout the former Klamath Reservation – and bring to a close this phase of the decades-long litigation of the tribal rights.

As in the six earlier Proposed Orders, Monday’s Proposed Orders confirmed the amounts of water claimed by the Tribes and the United States are the amounts necessary to establish and maintain a healthy and productive habitat for treaty species that will enable the Tribes to exercise their treaty-protected hunting, fishing, trapping, and gathering rights, and also ruled that the Tribal water rights can extend to off-reservation water sources where necessary to support the Tribes’ on-reservation harvest rights. Tribal Vice-Chairman, Don Gentry stated, “These rulings are definitely a victory for the fish and all the water dependent resources that are important to the Klamath Tribes.” 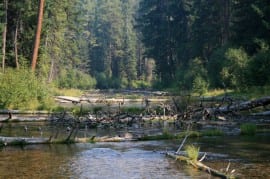 After more than 35 years of litigation the Klamath Tribes’ time-immemorial water rights to support their treaty-reserved hunting, fishing, trapping, and gathering rights on the former Klamath Reservation have finally been quantified in the Klamath Basin Adjudication (KBA), for six of the Tribes’ eight claimed water sources – the Williamson River, the Sycan River, the Sprague River, the Wood River, the Klamath Marsh, and some 140 seeps and springs throughout the former Reservation. The journey began in 1975 with the filing of the Adair litigation, a federal court case which declared the existence of the Tribes’ water rights but deferred quantification of those rights to the State of Oregon’s processes in the KBA. On December 1, 2011, the Oregon Office of Administrative Hearings issued Proposed Orders in the six cases quantifying the Tribal water rights claims in the amounts claimed by the Tribes and the United States, Bureau of Indian Affairs, as trustee for the Tribes. The rulings were a resounding victory for the Tribal and federal Claimants, as they adopted, across-the-board, the flow amounts or water levels in each case sought by the Tribes, and confirmed, once again, that the Tribal water rights are the most senior in the Basin. Tribal Vice-chairman, Don Gentry stated, “This is a great day for the Klamath Tribes. It is a milestone in the Tribes’ struggle to protect their water, fishing, hunting and other Treaty rights.”

The Proposed Orders confirmed that the amounts of water claimed by the Tribes and the United States are the amounts necessary to establish and maintain a healthy and productive habitat for treaty species that will enable the Tribes to exercise their treaty protected hunting, fishing, trapping, and gathering rights. “The Proposed Orders give everyone in the Basin plenty to think about,” said Jeff Mitchell who leads the Klamath Tribes’ Negotiating Team. The Team has been working hard on settlement negotiations regarding Klamath Basin water and related resource issues, resulting in the recent introduction of legislation to enact the Klamath Basin Restoration Agreement. “These rulings highlight the role that the Klamath Basin Restoration Agreement can play in resolving Basin water issues. The Tribes will be evaluating the rulings and discussing them with others in the Basin to determine the best path from here on.”

“This is an important step in the Adjudication. The cases will move on to Klamath County Circuit Court where much work remains to be done. Meanwhile, it is a time for the Tribes to feel good about their commitment to protecting Treaty water rights and other resources,” said Tribal Attorney, Bud Ullman.

Along with Klamath Water Adjudication Project attorneys Bud Ullman and Sue Noe, the Native American Rights Fund has represented the Klamath Tribes throughout the Klamath Basin Adjudication process. “A lot of thanks needs to be shared with all those involved over the past three decades, including NARF attorneys Walter Echo-Hawk (ret.) and David Gover, our colleagues at the US Department of Justice and Bureau of Indian Affairs, and of course the leadership and members of the Klamath Tribes but with that said there is a lot of work yet to come” said, NARF Executive Director John Echohawk.