Working to Realize Indigenous Peoples’ Rights in the U.S. 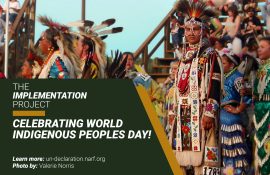 Learn more about these efforts at: https://un-declaration.narf.org/