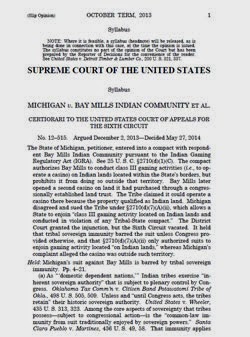 Have you been following and waiting for a decision in the important tribal sovereign immunity case, Michigan v. Bay Mills Indian Community?  Wait no more!  This morning, in a 5-4 decision, the Supreme Court of the United States affirmed the long-standing doctrine of tribal sovereign immunity and explained that it is for Congress, not the Court, to determine the circumstances where tribes should be subject to suit. This is a rare and spectacular WIN for tribal interests before the nation’s highest court.  In addition to NARF’s work on the case through the Tribal Supreme Court Project, NARF also helped prepare a ‘friend of the court’ brief on behalf of the National Congress of American Indians, the National Indian Gaming Association, the Affiliated Tribes of Northwest Indians, the Council for Athabascan Tribal Governments, and fifty-one federally recognized tribes.
To read the Court’s opinion, follow this link.