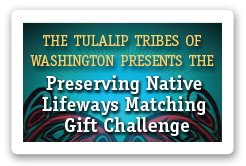 The Tulalip Tribes of Washington announced late last week the award of $50,000 to the Native American Rights Fund (NARF), a national non-profit legal and advocacy organization committed to defending the rights of Native Americans. In an unprecedented move, the Tulalip Tribes are using its contribution to launch a nationwide “Preserving Native Lifeways” fundraising campaign with NARF in order to raise an additional $50,000 to match the Tulalip Tribe’s contribution. The proceeds of the campaign will support NARF’s efforts to preserve tribal existence (sovereignty & treaty rights), natural resources, and human rights. The organization also works to hold state and federal governments accountable to Native Americans. The “Preserving Native Lifeways Campaign” hopes to reach its $100,000, goal, which includes Tulalip’s contribution, by August 1, 2008.

“Our funding today to NARF and in support of the “Preserving Native Lifeways Campaign” includes an ongoing commitment to support NARF and we also issue a challenge to ALL tribes, individuals, organizations and businesses throughout the nation to join us with a commitment of their own,”” said Mel Sheldon, Chairman of the Tulalip Tribes. “”Contrary to popular belief, the wars against Native peoples, our traditional cultural and spiritual lifeways and our simple right to exist have never stopped,”” said Sheldon. “”Every day here at Tulalip our legal team and scientists work to maintain treaty guaranteed rights such as access to off-reservation fishing and marine resources and protection of our area environment. We also deal with jurisdictional rights on our own reservation to include control of natural and cultural resources and the activities of people.”

Sheldon went on to explain that “The Preserving Native Lifeways Campaign” is a powerful means to show how tribes and Native and non-Native peoples can come together in unity to invest in important non-profit organizations like NARF who are committed to defending the rights of Native Americans, their cultural and spiritual lifeways and the environment.” The Chairman added that “This campaign represents a truly historic effort across all sectors to reach its goal of raising $100,000 to benefit the rights of Native Americans. Tulalip is proud to lead this campaign effort on behalf of NARF and its important work. We sincerely hope people from all walks of life will join the Tulalip Tribes and give generously to this respected organization and its mission.”

To learn more about the Preserving Native Lifeways Campaign, watch a video challenge made by Chairman Mel Sheldon of the Tulalip Tribes of Washington. To make a contribution please visit: http://narf.convio.net/match. An update on the results of the fundraising campaign will be announced at NARF’s 7th Annual Visions for the Future Benefit Art Auction held in Santa Fe, New Mexico on August 22, 2008. All contributions are 100% tax deductible.

Founded in 1970, the Native American Rights Fund (NARF) is the oldest and largest nonprofit law firm dedicated to asserting and defending the rights of Indian tribes, organizations and individuals nationwide. The organization is headquartered in Boulder, Colorado with branch offices in Washington, D.C. and Anchorage, Alaska. NARF’’s practice concentrates on five key areas that face constant encroachment:

About the Tulalip Tribes

The Tulalip Tribes of Washington is a federally recognized Indian tribe and the successor in interest to the Snohomish, Snoqualmie, Skykomish and other allied tribes and bands signatory to the Treaty of Point Elliott. The 22,000 acre Tulalip Indian Reservation is located north of Everett and the Snohomish River, and west of Marysville, Washington. The Tribes maintain an aggressive environmental preservation program, both on and off of the Reservation to complement the Snohomish region’’s natural resources: marine waters, tidelands, fresh water rivers and lakes, wetlands, and forests. Developable land and an economic development zone along the I-5 corridor provide revenue and services for Tribal members. Tribal government provides health and dental clinics, family and senior housing, utilities, cultural activities, schools, childcare, higher education assistance, recreation, cultural and historical activities. The Tribes have approximately 4,000 members, with 2,500 members living on the Reservation. The governing body is the seven-member Tulalip Board of Directors. For more information, visit http://www.tulaliptribes-nsn.gov/ .