This year we’ll be highlighting important moments in NARF history.

On August 11, 1978, President Carter signed into law the American Indian Religious Freedom Act. That same year, NARF Executive Director John E. Echohawk assigned two Staff Attorneys to act as co-directors for the Religious Freedom Project of the Native American Rights Fund: Kurt Blue Dog, a Sisseton-Wahpeton Sioux from South Dakota, and Walter Echo-Hawk, a Pawnee from Oklahoma. Both attorneys had extensive experience in dealing with Indian religious rights in federal and state prison matters. Kurt Blue Dog noted that “[h]istorically, the lack of knowledge, unawareness, insensitivity, and neglect have often been the keynotes of the Federal government’s interaction with traditional Indian culture and religion.” 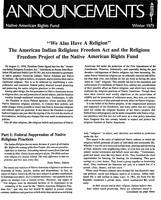 In October 1978, NARF was awarded a special grant from the Administration for Native Americans and the Community Services Administration to develop Tribal Energy and Social Development Offices on three Indian reservations. The overall objective of the project was to assist tribes to begin regulating and controlling the development of energy resources on their reservations.

For many tribes, the right to hunt, fish, and harvest certain plants on or near reservation land continues to be important to tribal subsistence and livelihood. Under treaties, which removed these tribes from their aboriginal hunting and fishing lands and placed them on reservations only a fraction of the size of their aboriginal areas, such rights were generally retained. Since its inception, NARF has considered these rights to be of paramount importance to tribal survival and identity. Click on the link below to learn about four cases in 1978 that illustrate both the diversity of tribal claims and the continued importance of hunting and fishing rights to Indian tribes.