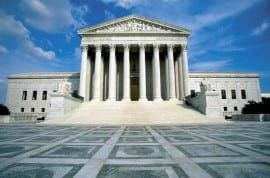 On May 11, the Tribal Supreme Court Project released the latest in its periodic updates on Indian Law cases before the U.S. Supreme Court. The Project was formed in 2001 in response to a series of U.S. Supreme Court cases that negatively affected tribal sovereignty. Its purpose is to promote greater coordination and to improve strategy on litigation that may affect the rights of all Indian tribes. Some highlights from the latest memo are included below.

The Court has granted review in two Indian law cases that have not been decided by the Court, and we expect that these two cases will be among those decided before the Court recesses at the end of June:

WASHINGTON V. U.S. (17-269)—On January 12, 2018, the Supreme Court granted a petition for review filed by the State of Washington that challenged the Ninth Circuit’s holding that the treaty right of taking fish secured to the western Washington tribes imposes on the State a duty to make feasible repairs to its road culverts to allow for the safe passage of salmon back to their spawning grounds. Respondents are the United States and 21 Washington Tribes who exercise treaty fishing rights in the western Washington case area. This case is the latest chapter in litigation over treaty fishing rights in Washington dating back more than a century, and which has occasioned seven prior Supreme Court decisions. Washington v. United States (17-269) (the Culverts Case) was argued before the court on April 18, 2018.

1.Whether  the  lower  courts  properly  held  that  the  State’s  construction  and  maintenance  of  fish-destroying  culverts  violates  the  treaty  Tribes  “right  of  taking  fish,”  where  it  is  technologically  feasible to retrofit those culverts to simulate normal stream conditions;

2.Whether  the  lower  courts  properly  rejected  the  State’s  argument  that,  pursuant  to  the  Court’s  decision  in  City of Sherrill  v.  Oneida Indian  Nation,the  federal  government  waived  its  claim  to  enforce the Tribes’ treaty rights by purportedly approving the design and installation of the State’s barrier culverts; and

3.Whether  the  district  court’s  injunction,  requiring  the  State  to  fix  a  substantial  portion  of  its  high  priority  culverts  within  17  years,  while  allowing  correction  of  the  rest  at  the  end  of  their  useful  life, violates principles of federalism, comity, and equity.

UPPER SKAGIT INDIAN TRIBE V. LUNDGREN (17-387)—On December 8, 2017, the Court granted review of a petition filed by the Upper Skagit Indian Tribe seeking review of a Washington Supreme Court decision, which held that an tribal sovereign immunity did not bar an in rem action against real property of the Upper Skagit Indian Tribe. In 2013, the Tribe bought property in Skagit County, Washington, and received a statutory warranty deed. Subsequently, the adjacent property owners filed a quiet title action in state court, alleging they had acquired title to a strip of land along the common boundary through adverse possession before the Tribe purchased the land. The tribe raised sovereign immunity before the state trial court, which subsequently issued summary judgement in favor of the plaintiffs.

The question presented is: Does a court’s exercise of in rem jurisdiction overcome the jurisdictional bar of tribal sovereign immunity when the tribe has not waived immunity and Congress has not unequivocally abrogated it?