Special Rapporteur on the Rights of Indigenous Peoples Victoria Tauli-Corpuz to speak in Boulder, Colorado 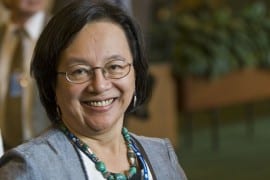 NARF’s work on implementation of the United Nations Declaration on the Rights of Indigenous Peoples and in the UNFCCC process to reach an international climate change agreement directly involve us in matters related to the work of the Special Rapporteur in fighting for the rights of indigenous peoples.

For more information on the event, please see the announcement from the American Indian Law Program.