The pipeline’s proposed route crosses through traditional Lakota homelands and treaty territories, and will affect not only the Rosebud Sioux Tribe, but also Native Nations in Montana, South Dakota, and Nebraska. It also endangers the Ogallala Aquifer, which supplies water for Native and non-Native users’ residential and agricultural needs on the High Plains in eight states.

“The land, water, tribal sovereignty, and governmental services were not ‘given’ to us in those treaties,” President Kindle said. “They were bargained for with the blood of our ancestors. We will not dishonor our relatives and unnecessarily endanger our health, safety, and wellbeing. The Rosebud Sioux Tribe will take any and all necessary steps, up to and including litigation, to protect our people, our land and water, and our cultural and historic resources.”

“As we have seen, spills from such projects can be catastrophic,” said NARF Staff Attorney Matt Campbell. “The Rosebud Sioux Tribe—just like South Dakota, Nebraska, and Montana—has a duty to protect the health and welfare of its citizens. NARF will help the Tribe make sure it has considered all of its options for ensuring the safety of the Tribe’s citizens, territory, and resources.”

“This is their land, their water,” said NARF Staff Attorney Natalie Landreth. “They have laws protecting their water and those laws must be respected. Keystone XL will need permission from the Rosebud Sioux Tribe, so this is not over.”

See the open letter from President Kindle for more information on the Rosebud Sioux Tribe’s position.

A History of the Keystone Pipeline 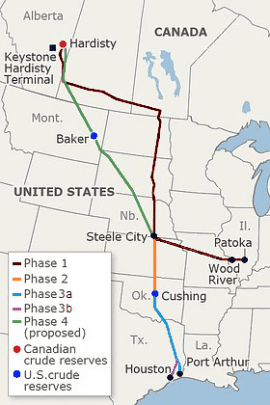 Phase 1 of the Keystone Pipeline was permitted in March 2008. Phase 2 and 3 did not require Presidential Permits and were built over several years starting in 2010. Because it crosses the U.S.-Canada border, Phase 4 does require a Presidential Permit; however, it has been met with opposition since its initial proposal. A timeline of the Keystone Pipeline project is below.

January: ConocoPhillips acquires a 50% stake in the project.

September: TransCanada and ConocoPhillips file an application for the Keystone XL Phase 4 extension.

June: TransCanada announces it will buy ConocoPhillips’ stake in Keystone.

March: Canada’s National Energy Board approves the Canadian section of the Keystone XL.

June: Phase 1 of the Keystone Pipeline goes online. It runs from Hardisty, Alberta, to Patoka, Illinois.

June-July: Increased opposition to Keystone XL includes legislators and scientists speaking out against the project; the Environmental Protection Agency questions the need for the pipeline extension.

July: The State Department extends its review of Keystone, saying they need more time for review before a final environmental impact assessment can be released.

August: The State Department releases its final environmental assessment that the pipeline would have a limited environmental impact.

December: U.S. legislators pass a bill with a provision saying President Barack Obama must make a decision on the pipeline’s future in the next 60 days.

January: Obama rejects the Keystone Pipeline, saying the December bill did not allow enough time to review the new route. Obama says TransCanada is free to submit another application.

February: TransCanada announces it will build Phase 3 of the Keystone Pipeline as a separate project that is not subject to presidential permission, since it does not cross an international border.

April: TransCanada submits a new route to officials in Nebraska for approval.

May: TransCanada files a new application with the State Department for the northern part of Keystone XL.

January: Nebraska Gov. Dave Heineman approves the proposed route for Keystone XL, sending the project back to the State Department for review. Pipeline opponents file a lawsuit against the Nebraska government claiming the state law used to review the new route is unconstitutional.

February: A Nebraska judge rules that the law that allowed the governor to approve Keystone XL over the objections of landowners was unconstitutional. Nebraska appeals.

November: TransCanada says the costs of Keystone XL have grown to US$8 billion from US$5.4 billion. Elections turn control of the U.S. Congress over to Republicans, who pledge to move forward on Keystone XL.

January: The Nebraska Supreme Court narrowly strikes down the lower-court decision, ruling that the governor’s actions were constitutional. The U.S. Senate approves a bill to build Keystone XL.

January: Trump signs a presidential memorandum inviting TransCanada to resubmit their application for a Presidential Permit and directing the Secretary of State, Department of the Interior, and Department of the Army to fast-track the decision. He also signs an order requiring pipelines in the United States to be built with U.S. steel.

March: The Trump White House exempts the Keystone Pipeline from the requirement to use U.S. steel.

Read the latest on the Keystone XL Pipeline case.