On October 17, 2019, the Lawyers’ Committee for Civil Rights Under Law (Lawyers’ Committee) and the Native American Rights Fund (NARF) issued a demand letter to the Republican National Committee (“RNC”) Chair Ronna Romney McDaniel demanding that the RNC stop its practice of sending misleading and deceptive mailers to voters in Bozeman, Montana featuring words such as “Census” and simultaneously seeking solicitations for the Republican Party. 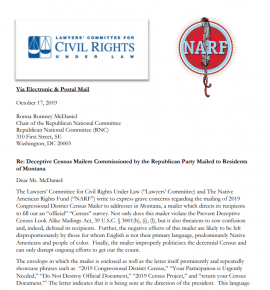 In particular, the demand letter points out that the mailing of 2019 Congressional District Census Mailer to addresses in Bozeman, Montana violates the Prevent Deceptive Census Look Alike Mailings Act, threatens to sow confusion and, indeed, defraud its recipients, disproportionately impacts those for whom English is not their primary language, predominately Native Americans and people of color, and improperly politicizes the decennial Census, disrupting ongoing efforts to get out the count.

“The Census is critically important for Indian Country. The political power of Native Americans and Alaska Natives is directly tied to the population data derived from the Census, because more accurate numbers translate into more representative districts. Indian Country also relies on the dollars distributed based on the Census for things like health care and education. That is why we are disturbed by this blatant misinformation in these mailers—it confuses voters and damages the entire Census process,” said NARF Staff Attorney Natalie Landreth.

Officials in Montana have already declared the RNC’s mailers deceptive and warned their citizens about responding to the “imitation census survey.” In a September 27, 2019, press release the Montana Census and Economic Information Center at the Montana Department of Commerce warned Montanans to be aware of the RNC’s mailers: “official U.S. Census Bureau surveys will never ask respondents for money, and those surveys will always be postmarked from the U.S. Department of Commerce, U.S. Census Bureau.”

Kristen Clarke, president and executive director of the Lawyers’ Committee, said: “The Census is too important a governmental responsibility to become a play-thing for politicians and political parties. These mailers, which prominently feature the word “Census” and are formatted to look like the official Census survey, are misleading and deceptive. They have the potential to confuse voters into thinking that they are an official document of the Census Bureau. The negative impact will disproportionately be felt by those whose primary language is not English.”

The mailers frustrate the increased educational and civic engagement efforts by non-partisan organizations like the Lawyers’ Committee and NARF and scores of other groups around the country, together with state and local officials to increase response rates to the 2020 Census in traditionally disenfranchised communities.

Read the letter sent to the RNC.