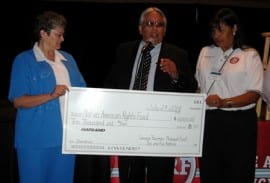 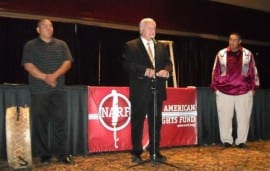 Shawnee, OK – In an unprecedented move last month, the Tulalip Tribes of Washington used their charitable contribution of $50,000 to launch a nationwide campaign called “Preserving Native Lifeways” established to protect Native American Rights by supporting the Native American Rights Fund. The Tulalip Tribes’ Chairman Melvin R. Sheldon Jr. issued a national challenge” to ALL tribes, individuals, organizations and businesses to join us with a commitment of their own.” This challenge was generously answered at the end of July by the Sac & Fox Nation and Citizen Potawotami Nation, both of Oklahoma. Each tribe contributed $10,000 to the Preserving Native Lifeways Campaign and helped NARF pass the half-way mark to its $100,000 campaign goal.

During a dinner held in conjunction with the Oklahoma Tribal Water Summit held at Fire Lake Grand Casino on July 29th, Principal Chief George Thurman and the Sac & Fox Nation’s Business Committee presented NARF attorneys with a check for $10,000 as part of the Preserving Native Lifeways Campaign. The Oklahoma Tribal Water Summit was a joint project organized by the Sac & Fox Nation and NARF that brought Oklahoma Tribal Leaders together to learn about and discuss Indian water rights and water issues facing their respective Nations.

“It is the Sac and Fox Nation’s privilege to make a contribution to NARF, ” stated Sac & Fox Nation Principal Chief George Thurman. “NARF has been meeting a need in Indian Country for nearly 40 years; a need which has not gone unnoticed. The Nation appreciates NARF’s dedication to all tribes and individual Indians. Principal Chief Thurman added, “The Nation also looks forward to continued excellence from NARF for generations to come and we are pleased that we can contribute to their work.”

Immediately following the check presentation ceremony, the Citizen Potawotami Nation’s Tribal Chairman, John Barrett, made a generous pledge of $10,000 on behalf of his Nation to the Preserving Native Lifeways Campaign.

The contributions by the Sac & Fox Nation and Citizen Potawotami Nation has now propelled the Preserving Native Lifeways Campaign past the half-way mark of reaching its goal of raising $100,000 for NARF. To date, the Tulalip Tribes’ challenge campaign has raised approximately $76,000 to support NARF. The Preserving Native Lifeways has now extended its campaign deadline to August 15th in effort to reach its goal of $100,000 raised. Updated campaign results will be announced at NARF 7th Annual Visions for the Future Benefit Art Auction in Santa Fe, New Mexico on August 22nd. (READ FULL STORY)