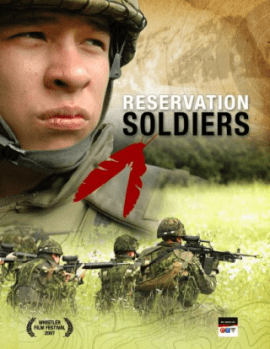 December 7, 2012 ~ Reservation Soldiers –  Filmed over the course of several years, Reservation Soldiers focuses on the relationship between the Canadian military and aboriginal youth.  For Blair, Mahekan and Noel, three teenage boys from remote Western Canadian reservations, the military represents an opportunity they don’t often see at home – adventure, discipline and cold hard cash.  When they attend Bold Eagle, a six-week military boot camp, they face the reality of military life and ponder a possible future in the Canadian Army.  Aboriginal recruiter Sergeant Ron Leblanc knows exactly where they’re coming from.  After 16 years in the military he is facing a difficult decision; pursuing a career with the Royal Canadian Mounted Police or “paying back” the military for helping him escape his troubled youth by shipping out to Afghanistan, Canada’s most dangerous mission since the Korean War.  For these young men, the Canadian military seems like the best option, but is it the only option for their future?
Lisa Jackson, filmaker