Obstacles at Every Turn: Barriers to Political Participation Faced by Native American Voters

In 2017 and 2018, the Native American Voting Rights Coalition—founded by the Native American Rights Fund—held nine public hearings to better understand how Native Americans are systemically and culturally kept from fully exercising their franchise. More than 120 witnesses testified from dozens of tribes across the country.

The final report, Obstacles at Every Turn: Barriers to Political Participation Faced by Native American Voters,  was released in 2020 and provides detailed evidence that Native people face obstacles at every turn in the electoral process: from registering to vote, to casting votes, to having votes counted.

Two updates to the Obstacles report were released in October 2021: 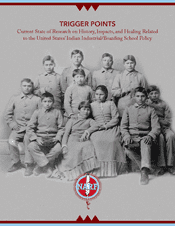 This review gathers existing research about the purposes and human rights abuses of US American Indian boarding school policies, why they matter still today, and—most importantly—how recovery can and is being accomplished. Special thanks the Tzó-Nah Fund for supporting this project and NARF over the years.

Download a PDF copy for educational or research purposes.

A Practical Guide to the Indian Child Welfare Act

See the online version of the Guide at the National Indian Law Library website for the most up-to-date information.

Download a PDF copy for educational or research purposes.

A Guide to Writing and Revising Tribal Constitutions, by Mark C. Tilden 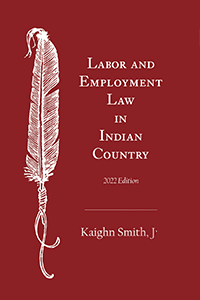 2022 edition coming soon. A comprehensive overview of the law governing labor and employment relations in Indian country, a growing, controversial, and complex area of law.

Fifty-three groundbreaking decisions made by the U.S. Supreme Ct. (2002) 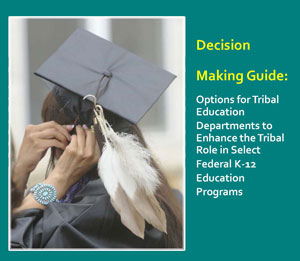 This guide is intended to help accomplish that goal by providing tribes and Tribal Education Agencies (TEA) with select K‐12 federal programs in which TEAs can potentially participate; thereby provide ways for tribes to enhance their role in Native education. (2013)

The Tribal Education Department National Assembly and NARF are proud to distribute two flyers to assist students and families in their quests to wear eagle feathers at their graduation ceremonies. The first trifold flyer is for students and families and serves to provide guidance on working with school districts to make the request. The second trifold flyer is an informational flyer for school districts, to inform them about the significance and importance of the eagle feather to graduating students. (2015)

1. Draft Materials for Tribal Governance in Education (1994)
2. Presentation/Workshop Materials (1997)
3. Cooperative Agreements in Indian Education (1998)
4. Federal and State Laws Regarding Tribal Education Departments (1984-1999) (1999)
5. Federal Indian Law and Policy Affecting American Indian and Alaska Native Education (2000)
6. An Historical Analysis of Requests for Direct Federal Funding for Tribal Education Departments for Fiscal Years 1989-2004 (2003)
7. A Compilation of Federal and State Education Laws regarding Native Language in Curriculum and Certification of Teachers of Native Languages (2003)
8. Major Federal Programs for American Indian, Alaska Native, and Native Hawaiian Education: What Are They and How Do They Involve Tribes? Part II: Programs Under the No Child Left Behind Act of 2001, Titles VII (Indian Education Act); VIII (Impact Aid); and, X (Bureau of Indian Affairs) (2004)
9. The Evolution of Tribal Sovereignty Over Education in Federal Law Since 1965 (2005)
10. Compilation of State Indian Education Laws (2005)

Annual Reports
The Annual Report contains detailed information on all NARF activities and programs, a treasurer’s report, and acknowledgment of contributions.