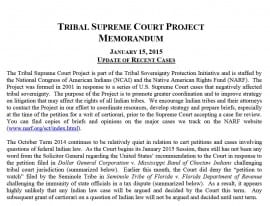 The Tribal Supreme Court Project is part of the Tribal Sovereignty Protection Initiative and is staffed by the National Congress of American Indians (NCAI) and the Native American Rights Fund (NARF). The Project was formed in 2001 in response to a series of U.S. Supreme Court cases that negatively affected tribal sovereignty.  The purpose of the Project is to promote greater coordination and to improve strategy on litigation that may affect the rights of all Indian tribes.  We encourage Indian tribes and their attorneys to contact the Project in our effort to coordinate resources, develop strategy and prepare briefs, especially at the time of the petition for a writ of certiorari, prior to the Supreme Court accepting a case for review.  You can find copies of briefs and opinions on the major cases we track on the project’s website.