The case will not move forward at this time and the voter protections enacted by the State of Nevada will remain in place for the upcoming election. Tribal members in Nevada that do not get at-home mail delivery will be able to pick up and drop off ballots for each other without fear that they will be prosecuted. Slow mail routes will not prevent tribal ballots that arrive after Election Day from being counted.  We thank all of you for your support as we continue to fight to ensure that Native voters are included in state and federal political systems.

On September 11, 2020, Pyramid Lake Paiute Tribe and Walker River Paiute Tribe filed to intervene in Donald J. Trump for President, Inc., Republican National Committee, and Nevada Republican Party v. Cegavske in the US District Court for the District of Nevada. The Republican organizations that brought the above case have challenged critical voting protections that the state enacted during the COVID-19 pandemic. These efforts to undermine voter protections directly threaten the Tribes’ rights as well as the ability for Native American voters in Nevada to cast their ballots and have those ballots count. 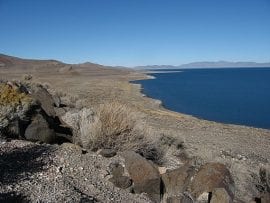 Like many states, Nevada is working to provide voters safe and fair options in light of the global COVID-19 pandemic. The state conducted its primary election entirely by mail-in ballot.  Despite being a well-intentioned means to combat the deadly COVID-19 outbreak, the move to vote-by-mail affected the ability of Native Americans in Nevada to vote. Many tribal members living on reservations in Nevada do not receive residential mail delivery and cannot safely mail their ballots from home. Only 35% of all reservations and colonies have home mail service. Geographic isolation, significant distance from post offices, limited rural post office hours, lack of transportation options, lack of Internet access, and other socio-economic factors—compounded by the COVID-19 pandemic—make it very difficult for Walker River Paiute and Pyramid Lake members to cast their ballot by mail. Given these obstacles, the move to all vote-by-mail resulted in a decreased Native American turnout for the 2020 primary election.

It is incredibly important to the Pyramid Lake Paiute and Walker River Paiute Tribes that voter protections such as these are enacted and Native voters are given adequate opportunity to cast their ballots.  If you would like to support NARF and our efforts to assist tribes as they fight for equitable treatment and rights during the upcoming elections, please donate now.