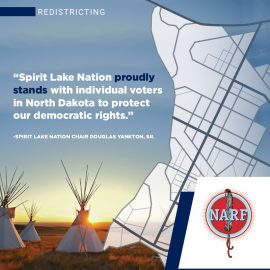 “Instead of creating fair boundaries as outlined in the Voting Rights Act, the map adopted by the North Dakota Legislature silences Native American voters on every issue, lowers the chance Native voters could elect a candidate they feel best represents their community, and prevents communities in these splintered districts from receiving a fair share of public resources. Spirit Lake Tribe proudly stands with individual voters in North Dakota to protect our democratic rights,” said Spirit Lake Tribe Chair Douglas Yankton, Sr. 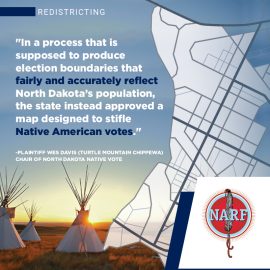 In order to comply with the VRA, North Dakota must implement a redistricting plan in which Native American voters on the Turtle Mountain and Spirit Lake reservations comprise an effective, geographically compact majority in a single legislative district. Such a plan can be drawn, is legally required, and would provide Native American voters the opportunity to elect their preferred candidates to both state house seats and the state senate.

“With each election, you hope your vote makes a positive change. Yet our state officials chose to create and approve an election map that robs Native American voters of that opportunity. We need to win this lawsuit because North Dakota is not above the laws that protect our democracy from exactly this kind of voter discrimination,” said plaintiff Collette Brown (Spirit Lake Tribe), who intends to exercise her right to vote in 2022.

“The new legislative district boundaries unfairly reduce the number of state legislative seats for which Native American voters in this region of the state have an opportunity to elect their candidate of choice,” said NARF Staff Attorney Michael Carter.

By using the redistricting process to reduce the number of state representatives in places with a large Native American population, North Dakota continues a tradition of attempting to suppress Native voters. While citizens of American Indian tribes have had the right to vote in U.S. elections since 1924, Native people have had to fight the state of North Dakota for their right to vote ever since.

The state of North Dakota passed laws and enacted policies that made it impossible for Native voters to participate in elections until 1958.  “North Dakota has not always treated our communities with the same respect that it has treated others in the state,” said Chair Azure in a 2021 editorial.