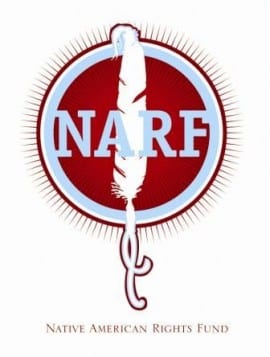 Three of the nation’s leading tribal organizations announced today they are in the early stages of pursuing litigation to protect the civil rights of Veronica Brown, a citizen of the Cherokee Nation who has been denied due process in the South Carolina courts.

Leaders of the Native American Rights Fund (NARF), National Congress of American Indians (NCAI), and National Indian Child Welfare Association (NICWA) said they were compelled to begin a process to represent the rights of Veronica in the situation, based on the Court’s order.

“When it comes to adoption proceedings, every court in this country has a legal obligation to put the best interests of a child first – every time, no matter the race of the child. This did not happen here. The South Carolina Court’s order represents a perilous prospect for not only Veronica, but any child involved in a custody proceeding in this country,” said Jacqueline Pata, Executive Director of NCAI.  “In a rush to judgment, the South Carolina Supreme Court ordered Veronica to be removed from her biological father without any consideration for her best interests.  The decision contributes to the long and sordid history of Native American children being removed from their families without any consideration of their best interests. The National Congress of American Indians refuses to stand by as the rights of this child are violated.”

Terry Cross, Executive Director of the National Indian Child Welfare Association outlined the history of best interest determinations within the case and how they run contrary to the order issued by the court last Wednesday:

“Two years ago, both the South Carolina Supreme Court and Family Courts held best interest hearings and determined that it was in Veronica’s best interest to be with her father and that he was fit parent,” said Cross. “As a result the South Carolina Supreme Court transferred custody to Mr. Brown. The legal system worked then, but it is being ignored now. It is unconscionable that no best interest hearing has been held in conjunction with the latest transfer order. Every child deserves to have his or her best interests considered – that is a fundamental right, and one that should not be denied any child.”

The previous ruling by the South Carolina Supreme Court, ruled in favor of the father establishing that putting Veronica in Brown’s care was in best interest. No best interest has ever been established for a transfer to the adoptive couple during the entire time of the case. The organization’s pointed to the court’s findings to favor Brown, thus leading to the placement (see original decision):

“The family court found persuasive the testimony that Father was a good father who enjoyed a close relationship with his other daughter…” (p.22)

“We can only conclude from the evidence presented at trial that Father desires to be a parent to Baby Girl, and that he and his family have created a safe, loving, and appropriate home for her….” (p.23)

“Likewise, we cannot say that Baby Girl’s best interests are not served by the grant of custody to Father, as Appellants have not presented evidence that Baby Girl would not be safe, loved, and cared for if raised by Father and his family.” (p.26)

Additionally, the presenters addressed the issue that certain provisions of the Indian Child Welfare Act no longer applied. Cross identified that in the court’s own decision in the original case it was stated that;

‘South Carolina courts have a long history of determining custody disputes based on the “best interests of the child.”…This important history is not replaced by the ICWA’s mandate.” (p.24)

The organization’s also highlighted the comments of Paul Clement the official representative for the child in the U.S. Supreme Court oral arguments, and the lawyer arguing for attorney for the Guardian Ad Litem, stating that if remanded back to the South Carolina Court there was every expectation that a hearing of best interest for Veronica must be held in order to uphold her rights;

“I’m here representing the guardian who represents the best interest of the child. From the child’s perspective, the child really doesn’t care whose fault it was when they were brought in one custodial situation or another. They just want a determination that focuses on at the relevant time, that time, what’s in their best interest. And so in the same way that we think if you rule in our favor and you remand to the lower court that there has to be a best interest determination that takes into account the current situation,” (p.24)

Click here to access the full transcript (p.24) and audio of this exchange between Clement and Justices.

John Echohawk, Executive Director of NARF, the nation’s leading non-profit law firm which has represented the interests of Indians and Indian tribes in federal and state courts since 1970 outlined the next steps to be taken by the organizations:

As you know, the Supreme Court of South Carolina issued its order last Wednesday, and gave Dusten and the Cherokee Nation five (5) days to file their petitions for rehearing.  Those petitions will be filed today.

When, as anticipated, the Supreme Court of South Carolina denies those petitions for rehearing, its order will become final and this case will be remanded to the State Family Court [quote] “for the prompt entry of an order approving and finalizing Adoptive Couple’s adoption of Baby Girl” [end quote].  As reflected in the order, the courts of the State of South Carolina can summarily terminate Dusten’s rights as a father and—without any hearing on what is in the best interests of this Indian child—and without any regard for due process of law to protect her civil rights—can remove Baby Veronica from her Indian father, her Indian family, and her Indian tribe with whom she has been living with for the past 18 months.

As Executive Director of NARF, I have instructed my legal staff to work with local counsel in South Carolina and Oklahoma to determine our best legal recourse through the federal courts to protect the rights of Baby Veronica.  In this case, we strongly believe that federal civil rights laws are being violated, that other applicable provisions of the Indian Child Welfare Act are being ignored by the state courts, and that the principles underlying treaty and international law protecting the rights of indigenous peoples are being undermined.