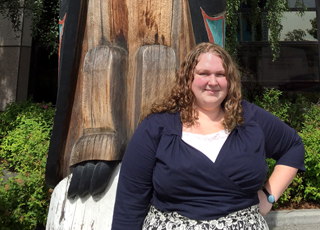 At NARF, we are dedicated to supporting the next generation of Indian law lawyers and one way we do this is through our Law Clerk Program, a ten- to twelve-week program for second-year law students.  NARF’s summer projects are extremely challenging because NARF practices before federal, state, and tribal forums, and because most of our cases—whether at the administrative, trial, or appellate level—are complex and involve novel legal issues.

This summer, the Law Clerk Program is again supported by a grant from the Confederated Tribes of Siletz Indians through the Siletz Tribal Charitable Contribution Fund.  Christine Miller, a law clerk in NARF’s Anchorage, Alaska office, was chosen to be the recipient of the Siletz grant due to her tireless work ethic and voluminous work product.

NARF thanks the Confederated Tribes of Siletz Indians and the Siletz Tribal Charitable Contribution Fund for its grant to further the NARF Law Clerk Program, which allows NARF to mentor Native law students like Christine and allows the students to make an impact on Indian law and to Native people during their term at NARF.  The Siletz Grant also allows NARF to continue our mission to develop Indian law and educate the public about Indian rights, laws, and issues.