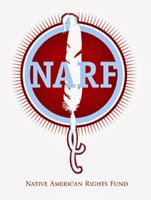 In consultation with our client, Angel Smith, the attorney appointed by the Cherokee Nation courts to represent the best interests of Veronica Brown, the Native American Rights Fund (NARF) has voluntarily dismissed the federal district court civil rights lawsuit that was filed in South Carolina.  Along with our partners at NICWA and NCAI, we ask that in moving forward, we all come together to work to make sure that no family ever has to go through this again.  Angel Smith’s press statement is as follows:

I was appointed to represent the legal rights and claims of Veronica. It included her legal right to a best interest hearing for custody and, at a minimum, for the process of transfer of custody. Her rights and claims were taken up in multiple forums, and much to my regret, no court took present consideration of her best interest in the decision for custody or transfer.
No matter how fit or even wonderful both families are or may be, it is disheartening that Veronica was ever in a position to know one mom and dad at bedtime one day, and the next night to be in a different home with another mom and dad. The fact that she did is unquestionably a failure of the legal systems as to this child. It is the judicial systems placing upon the little head of Veronica the issues many courts had an opportunity to and should have resolved under the legal right of Veronica to a present best interest hearing.
In legal matters, any child -including Indian children- hold legal rights and claims under various tribal, state, federal and/or international law. These legal rights are those of the child and independent of any other party. Failure of judicial systems to consider these independent rights and claims due the child is truly a failure to protect the most vulnerable of our societies and puts upon children the historic semblance of property. All our children deserve and are legally guaranteed more from our judicial systems. For that failure in these matters, my apologies to dear Veronica and both her families because it is now the two families who are left to pick up the pieces of Veronica and help her heal.
Today finds me in a place where continued litigation only places my client at the heart of potentially years of legal proceedings with no guarantee of outcome.  This is not in the interest of my client, and it is Veronicawho I was appointed to represent.  It is time for all of the United States and Indian country, the legal systems, and any acts growing out of self-motivation or hatred to quietly step aside.  Yes, there remains work to do for children and Indian children, but it is time to allow Veronica and her families to heal and grow together in private.
Wa do.