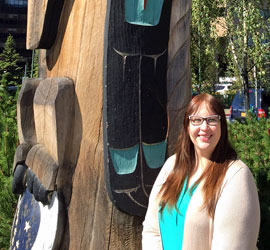 At NARF, we are dedicated to supporting the next generation of Indian law attorneys. One way we do this is through our law clerk program. This week we’re highlighting our final Summer 2015 Law Clerk, Loretta Miranda, who worked in NARF’s Anchorage office.

Loretta is a rising third year law student at Lewis and Clark Law School, where she is the Vice President of the Native American Law Student Association and Quinault Allottees Nelson D. Terry Scholarship recipient. Loretta grew up on the Morongo Indian Reservation in Southern California, and earned her B.A. in Sociology from California State University, Northridge. Prior to entering law school, she worked as the Outreach Coordinator for a Native American-owned community-based organization in San Francisco. Thank you, Loretta!

And, do you know a law student interested in the fight for Native rights? NARF is currently seeking candidates for our 2016 Summer Law Clerk Program! Positions are available in all three of NARF’s offices: Anchorage, Alaska; Boulder, Colorado; and Washington, D.C. September 25, 2015, is the deadline to apply.