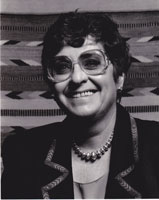 It is with heavy hearts that NARF mourns the passing of Evelyn “Evie” Stevenson, who walked on yesterday. Evelyn was one of the first Native women to pass the Montana Bar and she was a longtime tribal sovereignty advocate with many accomplishments, including work with the Salish and Kootenai Tribal Court System and important work developing the Indian Child Welfare Act (ICWA). She was a nationally recognized ICWA expert as well as a strong advocate for sacred sites. In the 1980s, Evelyn worked with NARF Staff Attorney Steven Moore, Doug Endreson, and Walter Echo-Hawk in successfully protecting the sacred Kootenai Falls in northwest Montana from destruction by a group of electric utilities determined to build a dam and hydroelectric project that would have dewatered the waterfall. In addition, she served on NARF’s Board of Directors from 1990 through 1995—including service as Board Chair from 1994 through 1995—and remained a longtime supporter of NARF.

To read more about Evelyn, see this obituary that she herself helped author. And, thank you, Evelyn, for your years of friendship and support—you will be dearly missed.