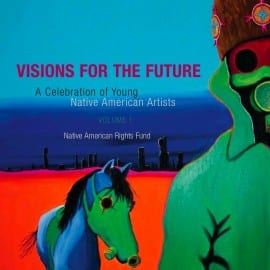 Denver, CO (12/1/2007)—The Native American Rights Fund in partnership with Fulcrum Publishing has recently published a visually stunning tribute to young Native American artists and their progressive visions. A collection of artwork from around the country, Visions for the Future: A Celebration of Young Native American Artists, shares unique views on the 21st century. These works capture the vivid emergence taking shape in the Native American art world and includes writings by the young artists on their perspectives on Native rights, Native art, and the future of Indian country.

Visions for the Future is based on the annual art show of the same name, sponsored by the Native American Rights Fund (NARF). The goal of the art show is to raise awareness for NARF’s work and to bridge generations and communities in the struggle for Native American rights through the celebration of contemporary Native American art and culture. Exploring topics such as resistance, perseverance, pride, media coverage, and legacy, the artists in these pages will be important names to watch.

Visions for the Future contains:

“The imagery of tribal life in these pages is both contemporary combat and revered allegiance. In collection of innovative painting, sketches, digital art, existing stereotypes are confronted, new perceptions are challenged, and a history of survival is championed. Although no single song, painting, or photograph can entirely express what centuries of catastrophe has done to tribes, they can teach everyone who views them about the valiant efforts fought and won, born from an era that has reignited a vision for the future.”—Jenni Ghahate-Monet, journalist (excerpt from Visions for the Future)

Visit NARF’s online store to purchase a copy of “Visions for the Future.” A portion of book sales will benefit the non-profit legal and advocacy work of NARF.