On Friday, May 2 at 7:30pm, NARF will co-sponsor the Niwot Native American Film Festival showing of River of Renewal. Please join us! 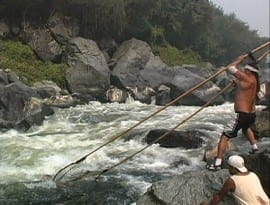 This movie is about one of the great rivers of America in crisis.  It tells the story of Jack Kohler, an urban Indian who discovers his roots among the Klamath River tribes.

The movie examines the water and wildlife crisis in the Klamath Basin – a bioregion larger than nine of the fifty states.  The communities that harvest food from the Klamath Basin – raising crops and cattle, catching salmon in the river and offshore – have all suffered due to the lack of enough water to serve the needs of irrigation and fisheries alike.

The crisis began in 2001 when the federal Bureau of Reclamation – responding to biologists’ warning that the over-allocation of Klamath water was endangering several species of fish – cut off irrigation water that farmers and ranchers had long depended on.  Irrigators responded with a dramatic civil disobedience campaign: a bucket brigade that carried federally banned water for a mile along Klamath Fall’s Main Street and into an irrigation canal.  Their protest paid off during the election year of 2002.  Circumventing the Endangered species Act, Vice President Dick Cheney made sure that the farms and ranches within the federal Klamath Project got all the water they could use.  That September, 80,000 spawning salmon died in the estuary.  Also that year, more than 80% of the juvenile salmon died after reaching the mainstem of the Klamath River.

In the years since then, a remarkable conflict resolution and consensus building process gained influence among the communities of the Klamath Basin. Eventually, they found common ground, recognizing that economic revival could occur only if ecological vitality were restored.  The Klamath River tribes’ ethos of world renewal, or pikiawish, “fixing the world” now influences the entire Klamath Basin.  The film shows leaders of different communities coming together to seek a way beyond economic stagnation, environmental disaster, and polarized politics.