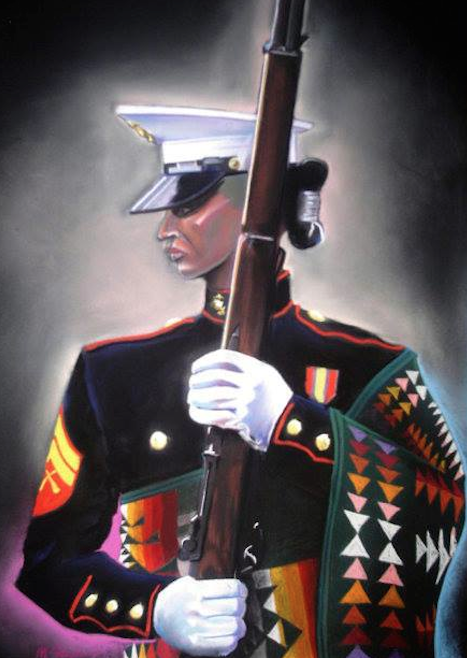 November is American Indian & Alaska Native Heritage Month. Join NARF as we celebrate and remember the heritage of Native Americans who have laid down their lives to help defend and preserve America’s democratic ideals.  They have proudly and courageously served in every major conflict from the Revolutionary War to the Iraq War, so it is appropriate that Heritage Month is celebrated during November, the same month in which Veterans Day is observed.

Today, NARF especially remembers our American Indian Military Veterans and honors all Modern Day Warriors and Heros, past, present, and future.  Native Americans have served their country with honor for generations, and we salute them.

Dr. Joe Medicine Crow (Crow) was presented with the Presidential Medal of Freedom, the highest civilian award in the United States by President Barack Obama.  He added that to his collection: a Congressional Gold Medal, a Bronze Star, and Legion of Honour, the highest decoration given in France.  During his military service, Medicine Crow completed all four tasks to become a Crow war chief, including touching a living enemy soldier, disarming an enemy, leading a successful war party, and stealing an enemy horse.

MSGT. Woodrow Wilson Keeble, who was awarded the Medal of Honor by President Bush year on March 3, 2008, is a proud member of the Sisseton-Wahpeton Sioux Tribe of South Dakota.

Army Spc. Lori Piestewa (Hopi) was aware of Indian women who served America before her.  This 23-year-old soldier became the first service woman killed in action in Iraq, and the first American Indian woman killed in combat.  Her death, on March 23, 2003, touched a grateful nation and changed the name of the most prominent mountain near Phoenix to Piestewa Peak.

In the 20th century, five American Indians have been among those soldiers to be distinguished by receiving the United States’ highest military honor: the Medal of Honor. Given for military heroism “above and beyond the call of duty,” these warriors exhibited extraordinary bravery in the face of the enemy and, in two cases, made the ultimate sacrifice for their country. – Jack C. Montgomery (Cherokee), Ernest Childers (Creek), Van Barfoot (Mississippi Band of Choctaw Indians), Mitchell Red Cloud Jr. (Ho-Chunk), and Charles George (Eastern Band of Cherokee).

You can honor American Indian veterans and all veterans by acknowledging them to friends and family as well as learning more about the history of their service at your local library, bookstore, or veterans hospital.

On Wednesday, November 12th, NARF’s Boulder, Colorado, office will be honoring our employees and relatives who have served in the military with a feast, prayers, and songs.  If you are in the area, please join us and bring a dish to share, as well as photos of your loved ones in the armed services.  For more information, please call (303) 447-8760.

Regardless if you are able to join us on the 12th, please take a moment that day to recognize the veterans in your own lives, whether friends, co-workers, or loved ones.  All our warriors are sacred.  Let us remember them on Veterans’ Day and every day.