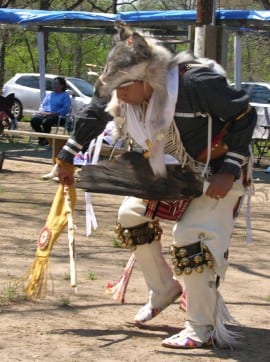 PAWNEE, OK – On April 21st, over a 100 tribal members from the Pawnee Nation of Oklahoma and their Nasharo Band Chiefs gathered at the Pawnee Nation danceground to honor writer Roger Welsch and his wife, Linda, for their gift of approximately 60 acres of land in Nebraska to the tribe.
The deed to the land, located near the Loup River and Dannebrog, Nebraska, was given to the Pawnee Nation of Oklahoma in a ceremony followed by a feast, an honor dance, and Mr. Welsch and his wife being made honorary members of the Pawnee Nation. Representatives from NARF, including Walter Echo-Hawk, were also in attendance at the tribal ceremony and honoring. Echo-Hawk, a Senior NARF Staff attorney assisted the tribe with the land transfer.

Welsch, a writer, stated in an interview with the Tulsa World that, “It’s something we had no choice in because it had to be done,” Welsch said. “These people are not guests on our land, but rather we are guests on their land,” stated Welsch in reference to the fact that Nebraska once served as part of the traditional homelands to the Pawnee prior to their removal to Oklahoma in the late 1800’s.

Speeches were made by a number of tribal officials, including the President of the Pawnee Nation, Ron Rice, and the Nasharo Chiefs. Other speakers included Walter Echo-Hawk, who spoke on the legal work and assistance that NARF has provided to the tribe. NARF currently represents the Pawnee Nation in the reburial efforts of 800 human remains in Nebraska. NARF worked with the Pawnee Nation and its Repatriation Committee to assist in the facilitation of the transfer of Mr. Welsch’s land to the Pawnee Nation for use as a reburial and cultural site. Echo-Hawk also assisted the tribe in attaining an opinion from the Nebraska Attorney General last year that clarified the tribe’s right to conduct reburials on private land.

While addressing tribal leaders and members during the gathering, Echo-Hawk encouraged Pawnee Nation leadership to consider renaming the tribe to “the Pawnee Nation of Oklahoma and Nebraska,” in light of the return of the lands.

Mr. Francis Morris, Pawnee Nation Repatriation Director explained to a Tulsa World reporter that, “The Loup River was a favored site of the Pawnees,” adding “It is our country.” Mr. Morris went on to add that prior to the Welsch’s gift of the land to the Pawnee Nation, that the tribe had no place to bury the remains of their ancestors. The tribe is currently leading an effort to collect blankets, shawls, and to raise funds to assist with the tribe’s efforts to conduct the reburials this fall on the land.
Click here to read the Tulsa World article, “Tribal Celebration: Gift From the Heart-Ancestral Land Returned,” by S.E. Ruckman
*Photo Credit: Tribal member Junior Pratt dances in honor of land return by Nebraska couple. Photo by Bill Howell