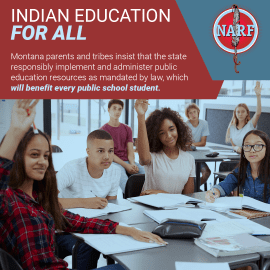 “Montana citizens approved their Constitution in 1972 and in 1999 the Montana Legislature passed the Indian Education for All Act (IEFA) to ensure that every state public school student – Indian and non-Indian — has the opportunity to gain a basic understanding of the history and current status of the American Indian tribes in this region,” said Confederated Salish and Kootenai Tribes Chairwoman Shelly R. Fyant. “We need state education administrators at the top level to create a system of accountability down to every classroom to ensure that every educator teaches this information in every subject area in a way that preserves American Indians’ cultural integrity and ensures that the money Montanans voted to invest in IEFA benefits every student. Now, more than ever, quality education is needed in our state.”

The State agencies’ failure to effectively implement and monitor IEFA means that the vast majority of Montana public school students are not getting any meaningful education about American Indians. “We want the children in our public schools to grow together with as much effort put towards understanding one another as possible,” said plaintiff and parent Amber Lamb (Assiniboine and Sioux Tribes of the Fort Peck Indian Reservation). “It is important to building a strong community for the future to be educated about historical elements that built the culture we are living in today.”

The Native American Rights Fund (NARF), American Civil Liberties Union of Montana, and the American Civil Liberties Union represent the five Montana tribes and eighteen Indian and non-Indian Montana public school students and their guardians against the Montana Office of Public Instruction (MPOI) and the Montana Board of Public Education (MBPE) for failing to implement IEFA. Every year since 2007, taxpayers have provided over $3 million for school districts to provide IEFA instruction, yet there is little evidence that MOPI and MBPE are holding districts accountable statewide for whether and how IEFA funding is spent.  Nor are MOPI and MBPE requiring schools and staff to work with tribes in achieving the constitutional and statutory IEFA guarantees and requirements.

“Montana is the first and to date only state to constitutionally require the teaching of Indian education to all students in its public schools,” said NARF Staff Attorney Melody McCoy, who has worked in Indian education for over 30 years. “That is a stunning testament to the people of Montana who are not getting what they voted for and what their public money is being allocated for. If we succeed in this lawsuit, going forward, that will change and the State agencies and officials charged with implementing the law finally will have to implement the law correctly and fully.”

NARF Staff Attorney Samantha Kelty agreed. “Since Montana made this promise to its citizens in 1972, thousands of students who have attended Montana public schools have never received the promised innovative education,” said Kelty. “The State agencies and officials apparently are incapable of self-direction regarding IEFA, but we hope the Montana court system will uphold their legal obligations.”