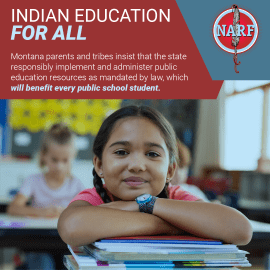 Equal access to learning Native American heritage and culture in our education institutions is a racial justice issue — and we’re suing to make sure Montana follows through.

All young people should have equal access to an education that includes learning the complete history of this country, including the experiences and viewpoints of marginalized communities. Unfortunately, in the United States, too many public schools fail to teach about diverse communities in their curriculum. For Native Americans, this disparity is even more stark. According to the National Congress of American Indians, 27 states make no mention of Native Americans in their K-12 curriculum, and 87 percent of state history standards do not mention Native American history after 1900. Access to learning about Native American heritage and culture in our educational institutions is a racial justice issue, and it’s one we’re fighting to preserve.

Although it is encouraging that some states have worked towards building their state curricula to more thoroughly and accurately discuss Native Americans—even passing laws requiring schools to do so—those states must also be held accountable when they fail. That’s why the ACLU, the ACLU of Montana, and the Native American Rights Fund, are suing the state of Montana for violating its legal obligation to ensure that all public school students have access to education about Native American culture and history.

In 1972, as a result of powerful organizing by Native American communities, the Montana Constitution adopted a provision that made a promise to all public school students that “Indian education” would be incorporated across all grades, subjects, and curricula. More than two decades later in 1999, the Montana State Legislature passed the Indian Education for All Act (IEFA), which underscored the state’s constitutional mandate to preserve the cultural integrity of Native Americans through education. The IEFA intended to make good on Montana’s unique constitutional promise after years of failing to deliver.

The IEFA created educational requirements for Montana public schools to ensure that every Montana school child, whether Native American or not, has the opportunity to learn about the distinct and unique heritage of Native Americans. Yet for decades since its enactment, the state has repeatedly broken that promise. In many schools, the cultural heritage and integrity of Native Americans is not being preserved, and students are not learning about Native American heritage.

Although the Montana Supreme Court has ruled that the state has a responsibility to implement the IEFA, the Montana Office of Public Instruction and the Montana Board of Public Education have failed to create uniform standards for implementing, monitoring, and enforcing Indian education as required by law. For example, only a small fraction of Montana’s public school districts fully report whether and how they are spending IEFA funding, which means a school district might be using money specifically dedicated for Indian education for alternative purposes. In fiscal years 2019 and 2020, about 50 percent of IEFA funding to Montana public school districts went unaccounted for, according to annual trustees’ reports the ACLU obtained via public records request.

But it’s not just a failure to account for dedicated funding. Some schools are actually using IEFA funds for things that may be harmful to students. One Montana elementary school used IEFA funds to purchase the book Squanto and the Miracle of Thanksgiving, which tells the story of English traders who captured a 12-year old Native American boy, Squanto, and sold him into slavery. The book “approaches the holiday from an evangelical point of view” and fails to provide a Native American viewpoint, which can be damaging to Native students. This is just one example of how public educational systems in the United States historically have erased Native Americans and their perspectives.

In addition to learning about the importance of Native American histories and modern-day contributions, teaching all students about Native culture and heritage can help reduce cultural misunderstandings, racial stereotyping, and fear-based ignorance. For Native American students specifically, culturally responsive education can help foster a feeling of belonging within the education system, support the growth and development of their identities, and help uphold the established political and legal  sovereignty—independent governance—of their tribes. All of these things can lead to greater academic success.

Every student should have the right to receive an inclusive education and have an open and honest dialogue about America’s history. But unfortunately, states across the country are trying to prevent this by banning talk about gender and race in schools. This effectively erases the history and lived experiences of people of color, and censors discussion around racism and the critical role it has played in American history. The echoes from our colonial past and the history of using education as an assimilationist tool continue to haunt students in our current schools.

Equal access to learning about Native American heritage and culture in our education institutions is a racial justice issue. Representation matters.

The complaint can be found at: https://www.narf.org/nill/documents/20210722mt-iefa-complaint.pdf