‘Like a Family Member Has Come Home’: Celebratory Potlatch in Tyonek Honors Gift from The Nature Conservancy

Alaska made history earlier this week as leaders from NARF’s client, the Native Village of Tyonek, hosted a potlatch to celebrate a gift of culturally important land. The Nature Conservancy donated the 160-acre parcel to the tribe in honor of the deeply significant cultural sites recently discovered there. 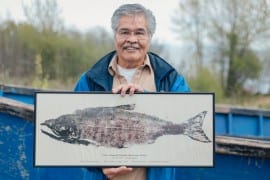 “It is like a family member has come home,” says Tyonek tribal president Al Goozmer.

The land lies less than two miles from the village of Tyonek, along the western shore of Cook Inlet in southcentral Alaska. Archeological fieldwork led by the tribe in 2013 discovered signs of earlier village life, including an early Indian cemetery, home sites dating back to before Western contact, and underground cold storage pits used for preserving food. Native people have relied on the area, near the mouth of the Chuitt River, for the traditional subsistence harvest of salmon for the past 1,000 years.

The Nature Conservancy donated the land with the agreement that its conservation values would be permanently conserved through a legal agreement (a conservation easement) between the Native Village of Tyonek, a federally recognized tribe, and the Great Land Trust, a local nonprofit. The land will be permanently stewarded by the Tebughna people in partnership with the Great Land Trust.

This is the first time an Alaskan tribe has partnered with a conservation organization to permanently protect tribal land through use of a conservation easement. The easement protects the conservation values of the land and also allows the tribe to continue traditional activities there. For instance, the land is open for subsistence hunting, fishing, and berry-picking by tribal members.

“As the local land trust, GLT is honored to be working with the Native Village of Tyonek to steward this parcel for generations to come,” says Phil Shephard, Great Land Trust executive director.

The conservation easement is named the “Etnen Bunkda (Mother of the Earth) Conservation Easement” and is inspired by the Dena’ina name for the region.

The agreement allows limited development on 12 acres of the property. Commercial activities related to tribal traditions, such as processing of fish or berries, are allowed there. The conservation agreement also allows for informational signs, kiosks and trail improvements as well as structures used for cultural activities, such as the annual Tyonek culture camp.

Held each summer for youth ages 8-18, the camp provides children with opportunities to learn from community elders about Dena’ina history, tradition and culture.

The nonprofit Native American Rights Fund represents the Native Village of Tyonek in the land transfer. A gift from the Lannan Foundation provided the funds necessary to steward the lands into the future.

“The opportunity to work with The Nature Conservancy, Great Land Trust, and the Tribe on this project has been very rewarding. With this transfer, Tyonek is receiving back land that has been part of its Traditional Cultural Landscape for millennia. The cultural values that make this property unique will now be protected for generations to come,” says Heather Kendall-Miller of the Native American Rights Fund.

The Tebughna, a Dena’ina Alaska Native Athabascan people, have lived in this area for most of the last thousand years.

The landscape includes a mosaic of wetlands, grassy meadows and birch and spruce forest. The area provides habitat for a diversity of migratory bird species as well as moose, brown bears and black bears. The nearby Chuitt River estuary is a very productive nursery for juvenile salmon. (While local people often refer to the stream as the Chuitt River, the U.S. Board on Geographic Names identifies it as the Chuitna River, which is the name typically appearing on maps of the region.)

The land parcel is located less than one-half mile from the west shore of the Chuitt River, and about two miles from the Village of Tyonek (pop. 200). Kenai Peninsula Borough lands border the parcel on three sides.

Locally, the land has been known as the Smith Homestead. Mary and Frank Smith homesteaded this land and received a land patent from the federal government in 1936, as per the federal Homestead Act of 1862. The family lived a subsistence lifestyle, growing food, milking cows, and harvesting wild foods such as moose and salmon and enjoyed their relationship with the nearby village. The family eventually donated the 160-acre homestead to the Catholic Church. None of the family members are surviving.

In 2008, the Alaska Diocese of the Catholic Church conveyed the former Smith homestead to The Nature Conservancy, which in turn gave the land to the Native Village of Tyonek in a signing ceremony with the Great Land Trust on March 18, 2015.

The above was taken from a joint press release from the Native Village of Tyonek, The Nature Conservancy, the Native American Rights Fund, and the Great Land Trust.