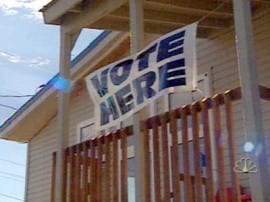 by Maria DowneyMonday, June 11, 2007
ANCHORAGE, Alaska — In federal court today, the American Civil Liberties Union of Alaska, along with the Native American Rights Fund, filed a lawsuit against state and local election officials on behalf of Bethel area voters.

Voters in the region claim their rights were violated when ballots and resources were not provided for Yup’ik speakers.

Rural Alaskans often cannot simply drive across town to a polling station and cast their ballots. In fact, some Bush communities require a boat ride or a river navigation to fulfill their civil duties — a task that is respected and taken seriously. 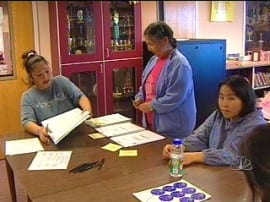 Some believe that the Division of Elections — at both the state and local level — has violated the National Voting Rights Act of 1965 by not providing ballots in some Native languages.
Natalie Landreth of the Native American Rights Fund said the language barrier leaves people confused about ballots.
“It’s completely beyond a doubt that they are not casting a meaningful ballot when they can not fully understand what they are voting for,” Landreth said.
Many elders in Bethel primarily speak and read Yup’ik, the largest of the Alaska Native languages.
The lawsuit alleges that the violations have been ongoing, and that elections officials have denied voter assistance and voting materials to non-English speakers.
“The fundamental right of an American citizen is to participate in representative democracy, but many Yup’ik communities and the four specifically in this complaint are faced with a choice of voting incorrectly or in a way they did not intend, or not voting at all,” Landreth said.
Attorneys for both civil rights organizations said they were compelled to sue after speaking with community elders in the Bethel region who claimed to have quit voting after being unable to read or understand ballots.
Landreth said some elders told her they were afraid to vote because they could not understand the ballots.
An example given by attorneys in the case involved the so-called English-only measure, an approved ballot proposition that requires the state to use English in all government functions and actions. Yup’ik speaking elders said the ballot proposition was listed in English only, and they mistakenly voted for it.
Jason Brandeis of the ACLU of Alaska Foundation said voter’s rights are being violated.
“Enabling people to have meaningful access to the electoral process — that’s what the Voting Rights Act is all about. It’s to ensure every American citizen who has the right to vote can participate fully in that process, and that’s a right that is guaranteed to every one under the 15th Amendment to the Constitution. This is something that is not happening in the Bethel census area,” Brandeis said.
While a decision would immediately affect Bethel area voters, where the largest group of Yup’ik speaking voters in Alaska is located, it would also affect other Native communities across the state that fit the Voting Rights Act criteria for language assistance.
“To enforce the rights the people in the Lower 48 already have and that immigrant communities already have once they become citizens, we believe that America’s first people are also entitled to these same rights,” Landreth said.
Lt. Gov. Sean Parnell, the constitutional chief for the Division of Elections, would not comment on the lawsuit. His office said they had not yet seen the complaint.