Earlier this summer, six bands of the Kootenai (“Ktunaxa”) Nation gathered on the banks of the Kootenai Falls in northwest Montana to recognize the anniversary of a hard-won legal victory and to honor a powerful spiritual tradition. June marked the 30-year anniversary of the tribes’ successful court battle to protect the spectacular and sacred Kootenai Falls. At the event, Confederated Salish and Kootenai Tribal Council Chairman Vernon Finley explained, “This year’s gathering is about acknowledging the people that went to battle to preserve these falls; a lot of them have passed on. The other part of this gathering is to honor the falls’ spiritual significance.” Among those in attendance were former-Native American Rights Fund (NARF) Staff Attorney Walter Echo-Hawk and NARF Staff Attorney Steve Moore. Echo-Hawk and Moore were the attorneys for the Tribe in their legal battle thirty years ago, along with former NARF and now Washington, D.C., based attorney Doug Endreson, who was not able to attend the celebration. Another key member of the legal team, tribal member and in-house counsel Evelyn Stevenson, sadly passed away a couple of years ago.  Also missing due to their passing were elders Alec and Adeline Lefthand, former NARF Board of Directors member Patrick Lefthand, Kootenai Culture Program Director Patricia Hewankhorn and her husband Al, and numerous others, who bravely guided the legal team in this long journey. 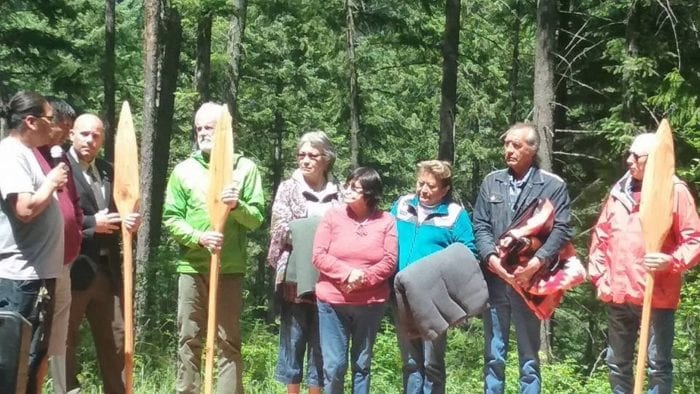 30th Anniversary Gathering on the banks of the Kootenai, June 2017

Kootenai Falls is described as the last great waterfall in the Northern Rockies.  The impressive Kootenai River drops 75 feet in less than a mile and thousands of cubic feet of water flow through every second.  It was not surprising that in 1978, a group of western Montana electric cooperatives applied to the Federal Energy Regulatory Commission (FERC) for a construction license for a dam and hydroelectric facility at the Falls.  The dam would consist of a 30-foot high wall diverting more than 90% of the flow of the river through an underground system behind the dam at the head of the Falls.

The project was slated to flood some areas, to dewater eight-tenths of a mile of the river below the dam during low flows, and to create a four-mile reservoir that would swallow the Falls and several popular fishing and recreational spots.  Conservation groups in the area submitted an appeal to FERC to stop the project. However, many assumed that the application would be approved. As Moore explained at the time, “There is almost an irrefutable presumption that a license will be granted by FERC.  Great deference is given to the applicant.  In the past 40 years, only three or four applications have been denied in contested hearings, out of thousands.”

But, beyond the spectacular nature and beauty of the area, there was more to the Falls than many realized. In a 1982 interview, William Rehmann, former executive director of the Montana Wildlife Federation, explained, “There’s a kind of otherness to those falls. When you stand there, you can feel their power.” For the Kootenai, the region is sacrosanct. The building of a dam would desecrate the sacred nature of the Falls and surrounding area. 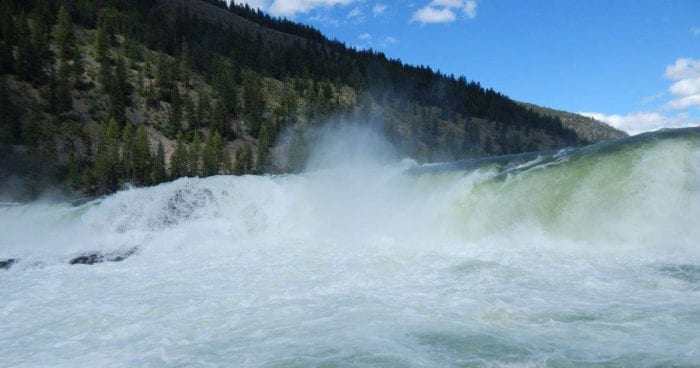 The Kootenai Falls area serves as a sacred center for the Ktunaxa people; however, the Kootenai practice their religion in private and do not speak publicly about the Falls. In 1982, in response to the dam application, Lawrence Kenmille, a Montana Kootenai, explained generally, “For many years we have kept the importance of the falls to ourselves, but with the dam proposal, we have to stand up to protect it. Kootenai Falls has been an aboriginal area and it has religious significance to us. [We] went there for a thousand years to pray. So you might liken it to a church site. We do not build our own monument. Nature builds a monument for us.”

So, when the hydroelectric project applied for a license in 1978, NARF Attorneys Moore, Echo-Hawk and Endreson, along with  Stevenson, represented the Kootenai people of Montana, Idaho, and British Columbia and petitioned that the dam’s license application should be denied for two reasons: (1) the project would not serve the public interest under the Federal Power Act, and (2) it would impair free exercise of the Kootenai religion in violation of the First Amendment of the U.S. Constitution and the American Indian Religious Freedom Act of 1978.  NARF’s prime interest was in protecting Kootenai Indian religious worship in the Kootenai Falls area.

The religious beliefs and practices of Native Americans, like all Americans, are supposedly protected by the First Amendment to the U.S. Constitution.  Yet the unique qualities of many traditional Indian religions, such as the Kootenai, have made traditional First Amendment arguments ineffectual. Through enactment of the American Indian Religious Freedom Act in 1978, Congress found Indian religion to be an indispensable and irreplaceable part of the nation’s heritage and declared a national policy of preserving the free exercise of Indian religion.  However, even with these protections in place, the case was challenging.  “We really had to work to prove that constructing this dam would have a dire impact on the area’s fisheries, wildlife, recreation, and most importantly the cultural significance to the Kootenai people,” Moore said.

In April 1984 following a 13 week trial, Federal Energy Regulatory Commission Judge Miller recommended denying the license.  The applicants appealed the decision to the full Commission.  On June 25, 1987, almost ten years after the initial application, the Commission unanimously denied the construction license. The opinion held that the proposed area for construction would indeed infringe upon the religious customs and beliefs of the Ktunaxa people and that the development would change Kootenai Falls significantly and permanently.  The electric utility applicants elected not to appeal their loss to the federal appellate court in Washington, D.C., and the Kootenai victory was sealed.

Thirty years later, we can only imagine what might have happened if the Kootenai and conservationists hadn’t fought the hydroelectric project.  For the Kootenai, the loss is hard to comprehend: a holy site, a place of ritual, a religious monument would have been gone.  An integral part of their culture would have been damaged beyond repair.  “People will recognize the holiness of places in the Middle East, not realizing that there are holy places right here in America that are just as powerful. Unfortunately American law and policy doesn’t recognize that significance,” Steven Moore said.

On this anniversary, we celebrate what was won and what was preserved.  NARF continues to stand firm with the Kootenai, and all Native people who seek to protect tribal practices, sacred places, and a traditional way of life. From Bears Ears to Kootenai Falls to Standing Rock and beyond, NARF will stand firm for justice.