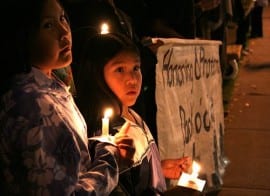 The San Francisco Peaks are sacred to 13 tribes. The Peaks and numerous other sacred places will be the focal point of National Days of Prayer to Protect Native American Sacred Places. Photos by Save the Peaks Coalition.

Washington, DC (6/16/08)—
Observances and ceremonies will be held across the country on June 20 and 21 to mark the 2008 National Days of Prayer to Protect Native American Sacred Places. Times and places for public commemorations are listed in the following pages. Some of the gatherings highlighted in this release are educational forums, not religious ceremonies, and are open to the general public. Others are ceremonial and may be conducted in private. In addition to those listed below, there will be commemorations and prayers offered at sacred places that are under threat at this time.
“Native and non-Native people nationwide gather at this time for Solstice ceremonies. We honor sacred places, with a special emphasis on the need for Congress to build a door to the courts for Native nations to protect our churches,” said Suzan Shown Harjo (Cheyenne & Hodulgee Muscogee). She is President of The Morning Star Institute, which organizes the National Sacred Places Prayer Days. This will be the sixth of the National Prayer Days to Protect Native American Sacred Places. The observance in Washington, D.C., will be held on June 20 at 8:00 a.m. on the United States Capitol Grounds, West Front Grassy Area (see details under the Washington, D.C. listing below). The first National Prayer Day was conducted on June 20, 2003, on the U.S. Capitol West Lawn and nationwide to emphasize the need for Congress to enact a cause of action to protect Native sacred places. That need still exists.
“Many Native American sacred places are being damaged because Native nations do not have equal access under the First Amendment to defend them,” said Ms. Harjo. “All other people in the United States have the First Amendment to protect their churches. Only traditional Native Americans cannot get into the courthouse through the Freedom of Religion Clauses. That simply must change as a matter of fairness and equity. Native nations today have to cobble together protections based on defenses intended for other purposes. Those may permit lawsuits, but they do not provide a place at the table when development is being contemplated, and there is no guarantee that a lawsuit won’t be tossed out by the Supreme Court for lack of a tailor-made cause of action.”
The Supreme Court told Congress in 1988 that it had to enact a statutory right of action, if it wanted to protect Native sacred places. “Twenty years have passed without Congress creating that door to the courthouse for Native Americans,” said Ms. Harjo, “and some of these places cannot withstand many more years of legal and physical onslaughts. 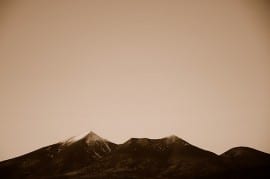 Observances and ceremonies will be held across the country on June 20 to mark the 2008 National Day of Prayer to Protect Native American Sacred Places. The event at the Native American Rights Fund is open to the public. It will begin at 7:00 am on the front lawn. Our address is: 1506 Broadway, Boulder, Colo., 80302. For more information, contact 303-447-8760.
See here for a listing of Prayer Day observances in 11 different states.