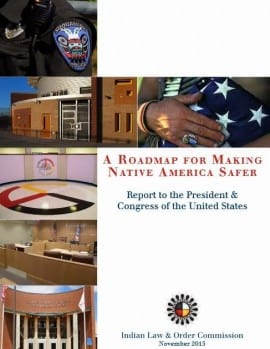 Yesterday the Indian Law and Order Commission released its final report and recommendations—A Roadmap For Making Native America Safer—as required by the Tribal Law and Order Act of 2010, Public Law 111-211 (TLOA).  As described by the Commission, the recommendations are intended to make Native American and Alaska Native nations safer and more just for all U.S. citizens and to reduce the unacceptably high rates of violent crime that have plagued Indian country for decades.  This report reflects one of the most comprehensive assessments ever undertaken of criminal justice systems servicing Native American and Alaska Native communities.

Notably, Alaska was the only state to have its own chapter, and the report found that Alaska’s law enforcement and justice systems “do not serve local and Native communities adequately, if at all.”   As the report states, “the status quo in Alaska tends to marginalize and frequently ignores the potential of tribally based justice systems, intertribal institutions, and organizations to provide more cost effective and responsible alternatives to prevent crime and keep all Alaskans safer.”