Brackeen Headed to the US Supreme Court

This article originally appeared in the NARF Legal Review, Volume 47 No 1 (2022). 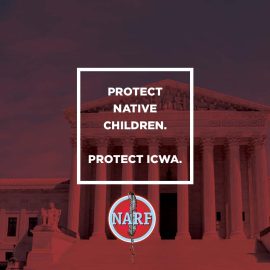 The U.S. Supreme Court in its next term will hear potentially the most important Indian law case in a generation when it decides whether Congress exceeded its constitutional powers when it enacted the Indian Child Welfare Act of 1978 (ICWA).

ICWA sets minimum federal standards for child custody proceedings involving any child who is a member of a federally recognized tribe (or who is both eligible for tribal membership and the biological child of a tribal member).  Child welfare advocates have long considered ICWA the gold standard in child welfare practice.  However, in the case that is now known as Brackeen v. Haaland, plaintiffs who oppose ICWA alleged that ICWA is unconstitutional for a variety of reasons.  The U.S. Court of Appeals for the Fifth Circuit issued a split decision, and parties on both sides filed a total of four petitions for certiorari to the U.S. Supreme Court: one from the United States, one from four intervening tribes (Cherokee Nation, Morongo Band of Mission Indians, Oneida Nation, and Quinault Indian Nation), one from the State of Texas, and one from individuals who sought to adopt Indian children.  In February 2022, the Supreme Court granted all four petitions and consolidated them under the caption Haaland v. Brackeen.

The case before the Supreme Court presents multiple constitutional questions.  Its outcome could have far-reaching effects for Native families and tribes.  “In a coordinated, well-financed, direct attack, Texas and other opponents aim to simultaneously exploit Native children while undermining the law that protects them—all while potentially undermining the entire framework of federal-tribal relations.  If they succeed in weakening protections for Native children it could negatively impact Native families and tribes for generations,” said Native American Rights Fund (NARF) Senior Staff Attorney Erin Dougherty Lynch.

Although ICWA became law in 1978, throughout its history, states routinely applied its provisions inconsistently.  To ensure uniformity and that best practices were used, child welfare advocates and tribes called on the federal government to update ICWA’s guidelines.  In 2015, the Department of the Interior (Interior) did just that.  The following year, after reviewing thousands of comments from tribes, states, and child welfare agencies, Interior also promulgated legally binding ICWA regulations (the Final Rule).  In the wake of these agency actions, the coordinated attack on ICWA began.

With the goal of erasing ICWA and dismantling tribal sovereignty, many anti-tribal-sovereignty interests came together to establish an unlikely alliance.  Adoption attorneys opposed the revised Guidelines and efforts to increase regulation and oversight of their highly profitable industry.  The Goldwater Institute and a handful of states opposed the Final Rule because it affirmed tribes’ authority and responsibility as sovereign nations to safeguard their citizens.  And a fringe subset of foster-family advocates opposed the Final Rule as part of a broader effort to expand foster parents’ rights.  Throughout the subsequent years of litigation in various federal courts, this coalition built of anti-tribal sovereignty interests coordinated their efforts to strike down child welfare protections for tribal citizens and attack tribal sovereignty at its core.

Taking It to the Courts

Although federal courts rarely hear ICWA-related cases, which typically fall under state or tribal jurisdiction, after the release of the 2016 Final Rule, anti-ICWA forces filed lawsuits in various federal courts across the country.  In 2017, anti-ICWA forces found a friendly venue in one division of the U.S. District Court for the Northern District of Texas, where that division’s sole civil judge has a history of consistently overturning federal statutes.  In October 2018, that judge issued a ruling invalidating many of ICWA’s provisions.  With this unprecedented ruling, the case headed to the U.S. Circuit Court of Appeals for the Fifth Circuit.

The Road to the Supreme Court

The Fifth Circuit includes the states of Texas, Mississippi, and Louisiana. These states’ geographic boundaries contain few federally recognized tribes, and these states have limited experience in tribal-state coordination. In the Fifth Circuit’s August 2019 three-judge panel ruling, the tribes and federal government prevailed on most of the issues asserted in the case, including equal protection, commandeering, non-delegation, and the Administrative Procedures Act.  However, when an en banc review (review by the entire court instead of just a three-judge panel) was requested, the court granted this request and held additional oral arguments in January 2020.

By that time, the coalition supporting ICWA had grown impressively large.  The Native American Rights Fund (NARF) and its colleagues at the law firm Dentons represented 486 tribes and 59 tribal organizations on a brief in support of ICWA, explaining its essential history and the Indian child welfare crisis that led Congress to enact the law.  Briefs in support of ICWA came in from, among others, a bipartisan coalition of 26 states and the District of Columbia, who described how ICWA is a critical tool that fosters state-tribal collaboration without improperly commandeering state agencies or courts; almost 30 leading child welfare organizations (including the Children’s Defense Fund, Adopt America Network, Child Welfare League of America, Casey Family Programs, and FosterClub), who explained how ICWA exemplifies social work best practices that result in better outcomes for children; a bipartisan group of members of Congress, who explained why ICWA was a proper exercise of Congress’s constitutional powers; and professors and scholars across a variety of fields.

In April 2021, the Fifth Circuit issued a 315-page collection of opinions that generally affirmed the constitutionality of ICWA.  However, certain provisions of ICWA were deemed to be unconstitutional by slim majorities of that court, while an equally divided (8-to-8) court left in place the lower court’s decision with regard to other parts of ICWA.  Despite the ruling’s length, the court’s opinion was unclear or inconclusive on many issues, and it ended with some of the court’s judges characterizing the entire episode as an “advisory” opinion that was not binding in state or tribal courts.  The Fifth Circuit’s ambiguous interpretation of ICWA―an act of Congress nearly 42 years old―presented a likely opportunity for the Supreme Court to grant review of the case.  The parties filed their petitions for certiorari in late 2021.

At the Supreme Court

The Fifth Circuit’s decision in Brackeen v. Haaland resulted in four separate petitions for certiorari to the U.S. Supreme Court, with each petition presenting the questions of the case differently.  In February 2022, the Court granted all four petitions, meaning that the Court will consider an unusually complex array of arguments—four distinct constitutional questions, some with multiple subparts.  With the stakes this high, and a case this complex, Brackeen has attracted a tremendous amount of interest from Native and non-Native advocates around the country.  Eight “friend of the court” briefs (amicus briefs) were recently filed with the Supreme Court supporting the plaintiffs and opposing ICWA.  The briefs supporting ICWA are due later this summer, and the coalition of tribes, states, child welfare organizations, and professors will likely be joined by children’s rights advocates, parents’ rights advocates, foster families and others, and there could be 20 or more amicus briefs.  Add that to the briefs by the United States and the intervenor tribes, and the pro-ICWA side will likely combine to put more than 150,000 words of pro-ICWA argument in front of the Court.

Working to coordinate this extensive team of pro-ICWA supporters is the Tribal Supreme Court Project (sct.narf.org), a joint project between the Native American Rights Fund and the National Congress of American Indians.  The Tribal Supreme Court Project draws on the collective wisdom and experience of more than 300 Indian law attorneys and academics from around the country.  The Project helps the parties in Indian cases before the Supreme Court formulate and execute an amicus strategy, working to ensure consistent and efficient messaging among the parties and their supporting amici.  “This is likely the most complex case that the Tribal Supreme Court Project has ever assisted with,” said NARF Staff Attorney Dan Lewerenz, who is leading the Project’s efforts in Brackeen.  “We have so much support from around the country in this case, which is a challenge—but a good challenge.  Our task is to make sure the Court doesn’t get overwhelmed by the volume, but instead sees all of that support fitting into the complex puzzle this case creates.”

All amicus briefs in support of ICWA are due to the Supreme Court in August 2022.  The Court has not yet scheduled oral argument, but it likely will be held in November of 2022.  However, preparations are well under way, and there are several actions that supporters can take right now to ensure the best outcome possible.  Below, please see how you can voice your support of ICWA and make sure the tribal families and children are best supported for long-term success. You can learn more at icwa.narf.org.

Lending Support to ICWA in this Litigation and Beyond

Copies of all of the petitions and amicus briefs can be found on the Tribal Supreme Court Project website.