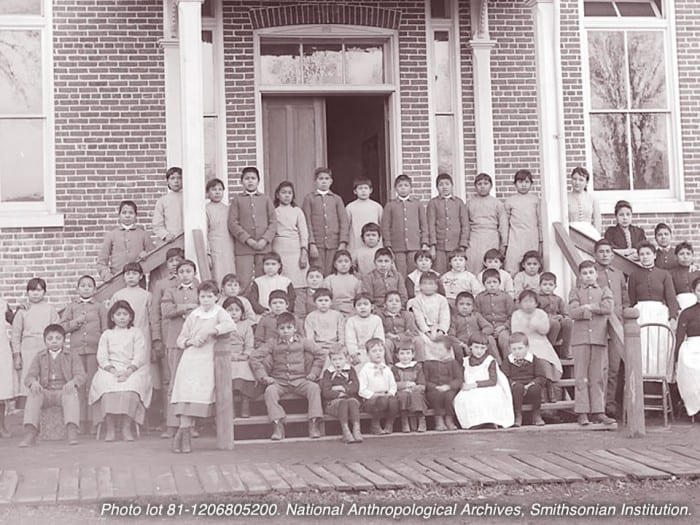 From the early 1800s through the 1970s, federal, state, and church assimilation policies and practices led to the forcible removal of Native American, Alaska Native, and Native Hawaiian children from their homes, families, and communities. Through these practices, Indian children were placed in one of at least 408 known federal Indian boarding schools across the country.

Disguised as educational institutions, Indian boarding schools furthered the government’s goals to dispossess Indigenous people from their land, assimilate hundreds of thousands of Indian children into non-Native culture, and erase their Indigenous identities. The boarding schools often prohibited Indian children from speaking their languages and banned them from practicing their cultures and traditions.

Many children did not survive this era and many of the children who returned to their communities had endured significant abuse. The effects of this era continue to live in Indian boarding school survivors and their descendants, and Indigenous communities continue to feel the effects through various forms of trauma. However, despite the abuse and trauma caused by this era, Indian boarding school survivors exhibited resiliency techniques that remain part of Indigenous communities today.

“To provide a path toward truth, justice, and healing, we must understand and acknowledge the history and effects of this era,” said Wright.

On May 11, 2022, the Office of the Assistant Secretary–Indian Affairs released a report that addresses the government’s role in the policies and practices that allowed for the forcible removal of Indian children from their families and communities. The report addressed the legacy of these policies and practices and recommended next steps the government can take to assist Tribal Nations in their healing processes.

The report arrived as the Truth and Healing Commission on Indian Boarding School Policies Act remains pending in both the House and the Senate. If passed, the act would authorize a Congressional Commission to formally investigate and record the history and continued impact that Indian boarding schools and associated policies have had on Indigenous people and communities.

“A holistic look at all accountability methods will allow for genuine healing in our communities from the incalculable loss of culture, community, land, and language stemming from these policies,” said Wright. “Justice will likely be unique for each community. However, NARF believes that the universal first step in achieving justice is uncovering the truth behind Indian boarding school policies and practices. Before we lose more of our Indian boarding school survivors and their descendants, we must document and record their stories, while being careful to not re-traumatize those individuals. We must honor their experiences in order to teach, and to learn the true history and impacts of this era.”

To understand the history behind the Indian boarding school era, one must understand how assimilation goals of the past manifested as modern assimilation policies. Modern policies include the Indian Adoption Project of the 1950s and the widespread and systematic removal of Indian children from their families in State child custody proceedings that led to the enactment of the Indian Child Welfare Act (ICWA).

In November 2022, the U.S. Supreme Court will hear a case challenging the constitutionality of ICWA: the gold standard in child welfare practice. ICWA sets minimum federal standards for child custody proceedings involving any child with citizenship a federally recognized tribe (or who is both eligible for tribal membership and the biological child of a tribal member). A coalition of anti-tribal sovereignty interests coordinated efforts to attempt to strike down ICWA through the Haaland v. Brackeen case, jeopardizing child welfare protections for Indian children and families, and attacking tribal sovereignty at its core. To learn more about how you can support tribal sovereignty and the effort to protect ICWA, follow @protecticwa on Twitter and Instagram.

Further, the federal government and many state governments have never apologized for the use of Indian boarding schools to terminate the cultures, religions, and languages of Indigenous people. Federal and state governments have not yet been held fully accountable for the lasting damage these attempts left in Indian Country. “NARF will work to address boarding school history, trauma, and support tribal nations in the accompanying efforts toward truth and reconciliation,” said Wright. “Tribal nations will drive their communities’ healing efforts, and they require the necessary resources and support to do so.”

Individuals seeking support regarding their experiences in Indian boarding schools or to assist relatives in healing efforts can find resources compiled by the National Native American Boarding School Healing Coalition at: https://boardingschoolhealing.org/.