Intertribal Resolutions Call for the United States to Take Action

Two of the nation’s most prominent intertribal organizations – the National Congress of American Indians (NCAI) and the Inter-Tribal Council of the Five Civilized Tribes – have passed resolutions calling on the U.S. to jumpstart implementation of the United Nations Declaration on the Rights of Indigenous Peoples (Declaration), adopted 15 years ago. “”It’s time for the Biden Administration to work with Tribal Nations to transform U.S. law and policy so that it protects Indigenous Peoples from genocide, from the theft of tribal lands and resources, and from discrimination and political exclusion,” said NCAI President Fawn R. Sharp. 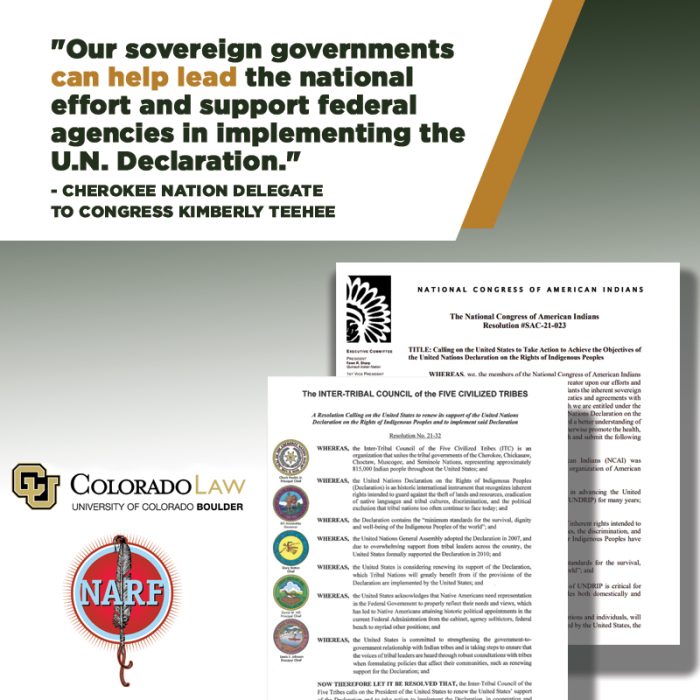 “The NCAI resolution requests the Biden administration take three steps to begin the Declaration implementation process, the first of which, creating a national action plan in consultation with tribes, is what several nations have done already. This summer, Canada passed a national law to implement the Declaration by mandating the creation of a national plan to be developed in consultation with First Nations to implement the protections of the Declaration into Canadian law and policy. That landmark legislation by this leading, fully-functional democracy in North America provides important precedent for the United States and Mexico to do the same thing,” said Pawnee Nation President Walter R. Echo-Hawk, who introduced the NCAI resolution.

The Implementation Project is a joint project of the Native American Rights Fund (NARF) and the University of Colorado Law School (Colorado Law), to advance education and advocacy regarding the Declaration and to work toward its implementation. “The NCAI resolution recognizes that it’s important to advance legal reform in the United States so that federal law meets the standards of the Declaration and makes its promises real in the lives of Indigenous Peoples here in the U.S.,” said Implementation Project Co-Director and NARF Staff Attorney Sue Noe.

“In international bodies such as the United Nations, the U.S. State Department and other federal agencies currently take positions on Indigenous Peoples’ issues that have not been vetted with tribes. The resolution’s calls for a U.S. Ambassador on Global Indigenous Affairs and full participation by tribes would advance self-determination and accountability,” said Implementation Project Co-Director Kristen Carpenter, the Colorado Law American Indian Law Program Director and Council Tree Professor of Law.

The Inter-Tribal Council of the Five Civilized Tribes also adopted a resolution urging the Biden administration to take the same three steps towards implementation. “The Five Tribes call for the Biden administration to take three steps with tribes to reboot the work to implement the Declaration in the U.S.,” said Cherokee Nation Delegate to Congress Kim Teehee, who led the U.S. support for the Declaration as the first U.S. Senior Policy Advisor for Native American Affairs under the Obama administration.

Indigenous Peoples of the U.S. worked alongside other Native activists and Indigenous intellectuals from around the globe for more than three decades to develop the Declaration and support its adoption by the United Nations General Assembly. Tribal governments have continuously advocated for the U.S. to adopt the Declaration and to begin implementation. This movement for UN recognition of Indigenous rights and participation of Native Peoples has spanned the history of the UN and faced many challenges along the way.

The provisions of the Declaration comprehensively describe the minimum standards that governments must take to provide basic human rights to Indigenous Peoples. “Once the Declaration is implemented in the United States, federal Indian law and policy will enter into a brand new era, the human rights era. Tribal nations will have stronger legal rights to protect their self-determination, sovereignty, treaties and other fundamental freedoms,” said President Echo-Hawk. “These resolutions are a call to action to all tribal nations and Native Americans to educate themselves about the Declaration and to work with The Implementation Project to implement it, as the challenge of our generation. The Pawnee Nation and other governments, as well as all individual Native people, have to work in a social justice law reform movement, to coax the federal government into implementing the Declaration. That movement starts with asking the Biden Administration to develop a national plan in consultation with tribal nations.”

Delegate Teehee agreed tribal nations could most effectively lead efforts to implement the Declaration, on a federal level and within their individual tribal governments. “To implement the Declaration in the U.S., I see Native nations taking concurrent paths. Our sovereign governments can help lead the national effort and support federal agencies in implementing the U.N. Declaration. We can also learn from each other, as each tribe determines how it will work to execute and manage the outlined provisions within their jurisdiction,” said Delegate Teehee.

Today, Indigenous Peoples in the U.S. and the U.S. federal government have an important opportunity to move forward in implementing the Declaration. Indigenous Peoples and others seeking resources on the Declaration and how to implement it, can visit The Implementation Project website (https://un-declaration.narf.org/) to download a copy of  publications, including the Tribal Implementation Toolkit, and to access news, resources, and events.