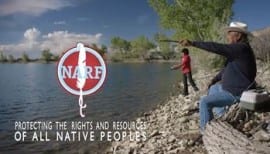 niversal and the Comcast Foundation have generously donated production funds and airtime valued at more than $2 million to the Native American Rights Fund (NARF), the leading legal organization dedicated to Native justice. The public service announcements (PSAs) will air in July and August, and highlight some of the many legal issues facing Indian Country as well as the cultural values NARF looks to preserve.

This is the second year in a row that Comcast NBCUniversal has made a significant contribution of broadcast time for NARF’s 30-second television spots. During 2014, Comcast NBCUniversal also donated $2 million in airtime.  The PSAs increased public awareness about the challenges to Native sovereignty, culture and natural resources.

NARF Executive Director John E. Echohawk said, “As Native people, we have a long history of overcoming great challenges to our survival and our way of life. Holding governments accountable for the promises they have made to Indian people is a cornerstone of our sovereignty and self-determination.”

“We are delighted to support NARF’s mission to provide legal representation to tribes and Native Americans who otherwise might not have a voice in the justice system,” said Fred Maahs, Senior Director of Community Investment for Comcast Corporation and Vice President of the Comcast Foundation.  “We are pleased to highlight issues in Native American communities and attract viewer attention to the many needs there.”

“We appreciate that Comcast NBCUniversal have made investments in NARF and across Indian Country,” said Echohawk. “Their commitment to Native issues will go a very long way toward building awareness of the critical needs of struggling Native American communities, and the critical role NARF and other Native organizations play in improving them.”