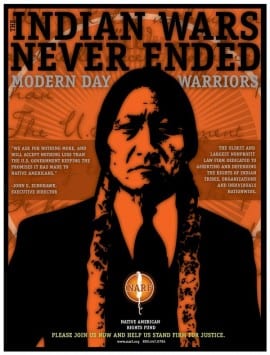 A bold illustration shows the Lakota Chief Sitting Bull looking stoic in braids, suit and tie, ready for a briefcase battle in the fight for tribal sovereignty. The lettering in this Ryan Red Corn piece reads: “The Indian Wars Never Ended.”The Internet version of this Native American Rights Fund public service announcement leads the viewer to a video in which a team of modern-day Native rights lawyers join forces with (pause) hip-hop artists. If this seems an unlikely alliance, well, the pairing actually works.

NARF, the country’s oldest legal advocacy organization for Native issues, has been unfolding its first-ever public service announcements – whether they have a shelf life is yet to be seen – where the nonprofit group shares the stage with hip hop.

Virginia Cross, a tribal councilwoman for the Muckleshoot Tribe in Washington, saw the spring launch of NARF’s public service announcement while attending this year’s National Indian Gaming Association’s annual trade show.Cross viewed “The Indian Wars Never Ended” PSA in Phoenix. She watched and remembered the day when the Muckleshoot Tribe owned a single acre of land in 1971.“We didn’t even own a tribal building,” Cross said. The tribe needed to fight one of the most powerful energy companies in the Puget Sound area, but had no money to wage a lawsuit that would protect its treaty-related fishing and water rights.Muckleshoot leaders turned to the Native American Rights Fund, based in Boulder, Colo., to take them to battle.

Today the tribe is a co-manager of the watershed in King County, the most populous county in Washington. And their one-acre land claim now exceeds 1,100 acres. The tribe also now operates a thriving casino in the Seattle area.Seeing the NARF announcement prompted Cross, who has been on the tribal council for nearly 30 years, to go back to her tribe in Auburn, Wash., and ask them to consider making a cash contribution to NARF.

Last week, the Native American Rights Fund’s executive director met Muckleshoot leaders in Washington, where they presented him with a $100,000 check.“I thought they did so much for us when we had absolutely nothing for the tribe,” Cross said. “I thought we should do something for them.”

The 67-year-old also said she understood NARF’s move to imbue their public service message with a hip-hop theme.“I thought it was pretty good,” she said. “You have to deal with the culture the way it is today.” Fifty percent of Muckleshoot tribal citizens are below age 21. “That’s the age group you need to be dealing with,” said Cross.

Crystal Echo Hawk, NARF’s assistant development director, led the effort to include a hip-hop theme as a way to reach across generations. After all, NARF’s mission affects the young and old.

During the past 36 years, NARF lawyers have battled states and the U.S. government over land claims, religious freedom, tribal termination and water rights.Echo Hawk turned to a 20- to 30-something group of artists to come up with a final product that reflects a trendy blend of mass media pop culture. They knew what they needed to do. They started their work with a basic question: “How do we indigenize that?”

Here are some of the creative team members: Red Corn worked on the graphic illustrations. Culture Shock Camp – which includes hip-hop artists Quese IMC and DJ Shock B, aka brothers Quese and Brian Frejo – provided the sound, lyrics and hip-hop beat. 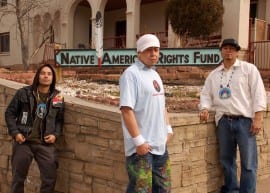 Artist Bunky Echo Hawk also joined forces with this dynamic group to drive home a message that stands for protecting tribal sovereignty. John Echo Hawk, NARF’s executive director, and members of the NARF legal team also take center stage in the video shoots, which can be seen in two 60- and 30-second video clips.

The last time I talked with Crystal Echo Hawk, she told me I was the seed that brought life to the group’s message. The seed started growing when I was a journalism student at the University of Colorado-Boulder.

One of my student projects led me to work for NARF. I was asked to write the forward in an annual report for the organization’s 25th anniversary.After reading about all the work NARF accomplished in a quarter-century, I was taken by the sheer magnitude of what this team of lawyers was fighting to protect. They fought for Indian rights in several landmark cases, including the Boldt Decision, Maine Land Claims, Menominee Restoration Act, Native American Graves Protection Restoration Act, American Indian Religious Freedom Act and the ongoing Elouise Cobell class action suit,I remember feeling overwhelmed and inspired at these modern-day battles in the courtroom being fought by modern-day warriors, the lawyers.

And I started writing: “The Indian Wars never ended. They merely changed venue. …”Reporter Jodi Rave can be reached at 1-800-366-7186 or at jodi.rave@lee.net