at the Native American Rights Fund

This Thursday • September 13 · Searching for the Sand Creek Massacre Site 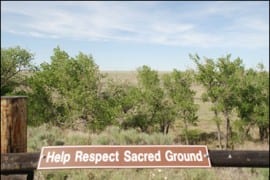 Gail Ridgely and Ben Ridgley, members of the Northern Arapaho Tribe, and Boulder historian Tom Meier will discuss the difficult process of determining the location and extent of the Sand Creek Massacre site. They were among teams of historians, archeologists, members of the Arapaho and Cheyenne tribes, and other experts who worked with the National Park Service to provide Congress with the information necessary to establish the site. The Ridgelys are direct descendants of Lame Man, a survivor of the Massacre. Led by Eugene Ridgely Sr. (1926-2005), the family became closely associated with education about Sand Creek and with organizing the Tribe’s Spiritual Healing Runs. Gail served as the first President of the Wind River Tribal College, and Ben, a former Co-Chairman of the Tribe, was instrumental in working with the State of Wyoming to establish the Sand Creek Trail in that state. Their brother, Eugene Jr., has also been closely involved with Sand Creek. Tom Meier is a Colorado native who has worked with the Ridgely family and the Tribe for over two decades.