November is American Indian & Alaska Native Heritage Month. Heritage Month is a time to celebrate the rich and diverse cultures, traditions, and histories and to acknowledge the important contributions of Native people.  It’s also an opportunity to highlight the important contributions of Native peoples and the shared histories between tribal nations and other communities.

Throughout Heritage Month, the Native American Rights Fund has looked at different elements of Native heritage from both an historical and contemporary perspective.  Our final installment looks at climate change.

Native Peoples & Climate Change:
Why Indigenous peoples need to be at the table.

“If you are not at the table, you are on the menu.”

Indigenous communities now find themselves at ground zero in a fight that may well determine the survival of their way of life and as sovereign nations.  A fight where it is imperative that they be given a voice and a seat at the table. 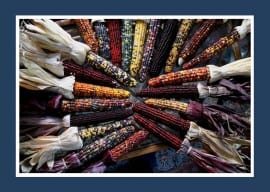 The cultural heritage of most Native American and Alaska Native peoples incorporates considerable knowledge and experience of the natural world, including meteorological and ecological phenomena.  Native Americans have had a practical understanding of chemistry, physics, agronomy, meteorology and astronomy since long before the sciences themselves were developed.

In fact, Native Americans have known for thousands of years that there was a black hole located through the center of the bowl in the big dipper. NASA discovered it just a few years ago.  Maize is the result of many years of cultivation and domestication of a wild grass known as teosinte. It is also believed that the domestication of maize is directly related to the rise of civilization in Mesoamerica.  Because cedar wood has a negative charge which repels the negative charge of lightening, throwing the cedar into the fire reduced the risk that lightening would strike the area where the people were.

Human beings act upon and are acted upon by their environments.  Current debates over global warming indicate the limitations of current scientific theories to account with absolute precision for natural phenomena.  This mutual interaction is a process that shapes both environment and culture.

People of European ancestry have gradually awakened to the profound nature of indigenous knowledge accumulated over many millennia.  Only recently has the realization dawned on some of them that the scientific knowledge of indigenous cultures holds information of tremendous importance for the planet.  Mother Earth is definitely in crisis and indigenous knowledge of ecosystems points the way to the paradigm shift and change in lifestyle that is needed at this time – a paradigm shift of healing and revitalization for all living things.  In this way, the indigenous communities can become the natural guides to restoring balance and harmony in the world.

Indigenous cultures, with their close ties to landscapes and ecological systems, are first-hand observers of climate change and bring first-hand experience of the changes that accompany a changing climate.  The changes in climate often represent life or death choices for subsistence economies. Indigenous peoples need a seat at the table.