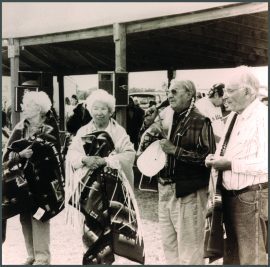 The funds held in trust derive from a treaty and an agreement by which the U.S. purchased lands from the Pembinas that became part of North Dakota and Minnesota. In the 1863 Treaty, as amended, the U.S. purchased about 2.5 million acres from the Pembinas for about 8 cents an acre. “The government told us how much they would pay us when we negotiated the 1863 Treaty. They told us how it would be paid out, when, and to whom and how long payments would last,” said Peltier. “And, like it told most tribes, the government told us it would not ask us for more.”

But the U.S. wanted more land, and gave the Pembinas few options as it demanded a second sale. “The federal government tried to force us to relocate from North Dakota by issuing our treaty-negotiated rations in Minnesota. We’d have to travel 300 miles one way to get food. Some of us tried but many never returned,” said Peltier, who has taught the history, treaties, and culture of her people at the Turtle Mountain Community College for over 30 years. Under extreme duress, the Pembinas sold (through the 1892 McCumber Agreement) an additional 10 million acres in North Dakota to the U.S. for about 10 cents an acre.

When Congress admitted the dishonorable nature of hundreds of treaties that the U.S. had forged with tribes and established the Indian Claims Commission (ICC) in 1946, the Pembinas submitted claims. “The ICC was a remarkable official admission by the U.S. that it had cheated tribes in their treaties,” said Native American Rights Fund (NARF) Staff Attorney Melody McCoy, who has represented the Pembinas since 1996. “The ICC could not restore land to tribes, but it could award additional monetary compensation to them.”

Instead of immediately paying ICC awards directly to individuals and tribal governments, following historic and paternalistic law and policy, the U.S. government held the awards in trust unless and until it distributed them. In 1971, Congress approved distribution of the 1964 ICC award to all Pembina individuals determined by the U.S. Department of the Interior to be eligible to share in the award. It took the Interior 13 years to determine that 21,268 individuals each were eligible to receive about $44. In 1984, the Interior began those distributions.

In 1982, Congress approved distribution of the 1980 ICC award. In 1988, Interior determined that 33,584 individuals were eligible to share in the award for about $1,200 to $2,400 per individual. The Interior made these distributions in 1988 and 1994. Peltier recalled the reaction on the Turtle Mountain Reservation. “My mom taught me that you can sometimes best educate people with humor. After the first 1980 award payments began, she went to the bank in this old truck she had, got rolls of dimes, and had t-shirts made. She decorated the truck for us to drive as a float in the St. Anne’s Turtle Mountain Days parade, with signs on each side that said: “‘Attention area farmers: we will buy your drought-stricken lands for 10 cents an acre. Payment in 100 years, without interest.’ We threw the dimes out to the crowd, yelling, ‘This is what your treaty got for you.’”

On a more serious note, Peltier remembers, “My family were members of the Pembina Treaty Committee of volunteers, who worked to understand the ICC awards and help convey what was going on to the Pembina people. My parents helped with research. Joe and Emma Great Walker, an elder couple who were fluent in Ojibwemowin, translated to our communities who did not speak English. I grew up listening to these elders, these leaders, talk about what the government did to us. It was only natural that, as these elders passed away, I and others from the next generations took up this work.”

Though pleased to begin receiving the ICC awards in 1984 and 1988, elected Pembina tribal leaders also had questions. The government had held their awards in trust for decades, and by law, the U.S. is charged as the trustee with investing the awards until distribution. How much had they earned? How much should they have earned? When efforts to get this information from the government failed, the Turtle Mountain Chippewa Band hired a private accounting firm to investigate. The accounting firm advised the Band to seek legal counsel.

The Pembina tribal governments secured assistance from NARF in 1991, and in 1992 NARF filed a U.S. Court of Federal Claims lawsuit against the government on behalf of all Pembina beneficiaries, alleging failure to account for and mismanagement of the Pembina awards, and seeking money damages for breaches of trust. The Pembinas refused to accept a partial accounting transaction report produced by a government contractor in 1996 as the full and accurate fiduciary accounting to which Pembina trust beneficiaries are entitled by law. Bit by bit–and sometimes only in response to court order–over several years the government produced thousands of accounting records to the Pembinas. NARF used these records in 2005 to outline the Pembinas’ first settlement proposal, which the U.S. rejected. Instead, the U.S. filed a motion to have the lawsuit dismissed or drastically reduced.

“I was with my Mom when we first met Melody as court-approved named representatives for our people. This was a critical moment. Many tribal members had given up and told us we were wasting our time, fair compensation would never happen,” said Peltier. “We had no idea what to expect. Melody spoke eloquently about how NARF believes in winning cases like this. She knew our history and the details of our treaties. After years without assistance or hope, it was a relief and an honor to hear someone from the outside take up our case, complexities and all, and outline the many, many steps we would have to take to proceed and succeed.”

Settlement negotiations and meetings for the Pembinas bounced back and forth from North Dakota and Montana to Washington, D.C. In March 2010, Peltier and other named representativesattended a negotiations session in Washington, D.C. “We joined in a circle in front of the National Courts building across from the White House, and we smudged down before we went in. That really helped us to bond together, all the Pembina delegates from Turtle Mountain, Chippewa Cree, Little Shell, White Earth, and many other places, to be of one mind and hope: that the settlement judge would listen. During the proceedings, there were so many lawyers sitting at the other table. At our table, there was just Melody and her assistant, yet Melody stumped them. The judge did listen.”

In July 2015, the parties reached agreement on a monetary amount for a potential settlement. In March 2018, the parties reached agreement on the non-monetary components of a potential settlement. In December 2020, the U.S. government gave final federal approval to the settlement. Part of the settlement involved filing the claims of the Pembina individuals in the U.S. District Court, as opposed to the Court of Federal Claims, where the benefits of federal court class action rules could lead to the needed finality for the settlement to work. When the District Court granted final approval of the settlement in June 2021, both parties anxiously waited for the appeal time to end in September 2021.

No appeals were filed, and the parties have moved on to payment of and distribution of the settlement proceeds. Payment has begun, and distributions should begin in early 2022 and likely will run through much of 2023.

The Chippewa Cree Tribe will receive $1,027,939; the Turtle Mountain Band will receive $6,853,350; the Little Shell Chippewa Tribe will receive $563,986; and the White Earth Band will receive $341,646. The 39,003 Pembina individuals collectively will receive $42,650,600, with individual amounts ranging from $50to $1,550. The settlement proceeds allocations are based solely on the acts of Congress that distributed the 1964 and 1980 ICC awards to the Pembinas. “It’s simply more money for everyone who already got money,” said McCoy. “Unfortunately, about one-third of the original Pembina individual beneficiaries have passed on. The Court ruled that their shares in this case pass to their heirs, which will add to the time it takes to complete the distributions.

Beyond financial compensation, in resolving this lawsuit, the Pembinas remained true to the teachings of their elders and ancestors to be persistent and patient in holding the U.S. government accountable to Indians. “One of the milestones of my career will be the decades I spent working with the Pembina Tribes and individuals in this case,” said McCoy. “It rectifies a series of injustices for which payment was long, long overdue.”