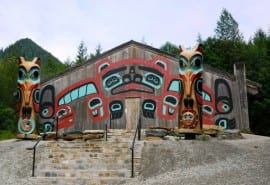 The Alaska National Interest Lands Conservation Act (ANILCA) provides a subsistence harvest priority to Alaska’s “rural” residents.  ANILCA itself, however, does not define which individuals or communities qualify as “rural.”

Saxman village is a coastal community of 411 residents.  The population is overwhelmingly Alaska Native.  Saxman has its own federally recognized tribal government, its own state recognized municipality, and its own Alaska Native Claims Settlement Act village corporation.  Saxman is, however, connected to the city of Ketchikan by a two-mile long road.

In 2007, the Federal Subsistence Board (FSB) promulgated a final rule revoking Saxman’s rural community status. The FSB reasoned that Saxman’s close proximity to Ketchikan justified aggregating the two communities together as one non-rural community. The Saxman IRA Council pursued its administrative remedies in order to reinstate its rural status. Implementation of the 2007 final rule was delayed by the Secretary of the Interior as the FSB engaged in an overhaul of the rural determination criteria used to designate communities “rural or non-rural” under ANILCA.

In June 2014, NARF filed a complaint for declaratory and injunctive relief in Alaska’s federal district court challenging the merits of the FSB’s 2007 decision to classify Saxman as non-rural. Soon after the complaint was filed, Deputy Secretary of the Interior Michael Connor announced the initiation of administrative rule-making aimed at providing “the Federal Subsistence Board to use more flexible criteria to designate rural communities” during the rural/non-rural determination process. Subsequently, NARF and the U.S. Department of Justice jointly moved to stay the litigation during the administrative rule-making. The court granted the stay on December 22, 2014. While the stay is in place, NARF will continue to represent the Organized Village of Saxman IRA through the rule-making process. In January 2015, a proposed rule for the rural determination process was published in the Federal Register.