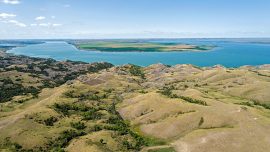 A delayed redistricting plan in Lyman County disenfranchises Native American voters. A preliminary injunction requires the county, by 2024, to replace an at-large election system that has made it impossible for Native voters to elect local representation for 30 years.

While over 40% of Lyman County voters live on the Lower Brule Reservation, an unfair at-large voting system ensured reservation voters could never elect a single candidate of their choice to the Board of Commissioners. Subsequently, the county commissioners have had little relationship with Lower Brule and community members’ needs, not even managing to maintain a road that crosses into the reservation that it’s obligated to keep functional.

The 2020 Census data showed that overall, the county’s white population decreased in the last decade, while the Native American population increased by over 21%. In the 2020 redistricting process, voters on the Lower Brule Reservation and the Tribe pointed out that to comply with Section 2 of the Voting Rights Act, Lyman County had to change its at-large system and allow Lower Brule Reservation voters the opportunity to elect two out of five commissioners. Instead, the Board of Commissioners sought special legislation through a secretive process with limited ability for opponents to register their concerns, and then announced that it would delay implementing the new district map until 2026.

On May 18, 2022, the Lower Brule Sioux Tribe and individual voters filed a lawsuit in the U.S. District Court for the District of South Dakota against the Lyman County Board of Commissioners for delaying the rollout of fair election districts. County commissioners adopted a plan to use non-Voting Rights Act-compliant district maps for two additional at-large election cycles before making changes. 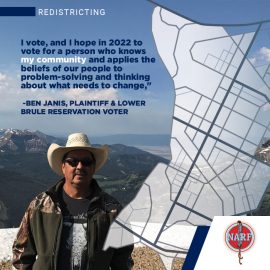 “This issue needs to be addressed now: Lyman County needs to comply with the Voting Rights Act sooner rather than later, so candidates we elect in 2022 can begin working alongside the other elected Commissioners,” said plaintiff, voter, and Lower Brule Sioux Tribe Tribal Councilwoman Stephanie Bolman. “Each and every day people who do not represent us make decisions that affect my community. Their decisions over the past three decades have created great disparities across various systems, which continue to have devastating effects on people I care about.”

“I have lived on the Lower Brule reservation all my life. We have a growing community and like all communities, we have issues to resolve and things to fix. I vote, and I hope in 2022 to vote for a person who knows my community and applies the beliefs of our people to problem-solving and thinking about what needs to change,” said plaintiff and reservation voter Ben Janis.

On Tuesday, July 26, the South Dakota District Court in Pierre held a hearing for a preliminary injunction to determine if Lower Brule Sioux tribe voters would have fair districts by the election in November. On August 11, 2022, the court granted the preliminary injunction in favor of plaintiff tribal members. The decision acknowledged that the county’s current redistricting plan would dilute the voting power of the Native community and required the county commissioners to create a new plan for the county elections in November.

The U.S. District Court in South Dakota emphasized the urgency of protecting Native voters’ right to fair elections in Lower Brule Sioux Tribe v Lyman County, granting a preliminary injunction in favor of plaintiff tribal members. “Cooperation between the Tribe and the County, between Tribal members and non-Tribal members, is crucial to the future of Lyman County. If the County does not come forward with an appropriate remedial plan, this Court can impose its own,” said Chief Judge Roberto A. Lange in the decision.

The decision acknowledged that the county’s current redistricting plan would dilute the voting power of the Native community and requires the county commissioners to create a new plan for the county elections in November. “This decision affirms that gatekeepers must make inclusive changes protected by the Voting Rights Act in a timely fashion and acknowledges that everyone benefits when local governments cooperate with tribal governments like the Lower Brule Sioux Tribe,” said NARF Staff Attorney Samantha Kelty.

“The judge ordered the county to work with the Lower Brule Sioux Tribe, and I hope they will take this opportunity as fresh start to achieve a shared goal of preparing to hold fair 2022 elections,” said plaintiff, voter, and County Board of Commissioners candidate Stephanie Bolman-Altamirano.

The 49-page order acknowledged the history of Lyman County’s voting patterns, “…the effect of a single county-wide district has been to create a system where the County’s white majority can and largely has blocked election of Native-preferred candidates.”

“I hope the judge’s ruling encourages the County to cooperate with the Tribe to create an election that includes all of us,” said plaintiff, voter, and County Board of Commissioners candidate Ben Janis.

On Friday, September 2, the court again ruled in favor of the Lower Brule Sioux Tribe and individual Native voters in a preliminary injunction that prevented Lyman County Board of Commissioners from delaying fair elections until 2026. The judge determined the county had not left enough time to prepare for fair elections in November, must commit to fair 2024 elections, and had proposed redistricting plans that violate the VRA.

“Although the order recognized the lack of time for a remedy this November, the Court’s order is a win for Native American voting rights,” said NARF Staff Attorney Samantha Kelty. “Lyman County’s delays prevented a VRA-compliant general election in 2022. We look forward to the opportunity to win at trial to ensure Native voters will finally have a voice on the Lyman County Board of Commissioners.”