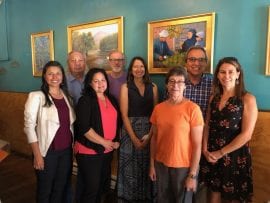 Lacking adequate health care and other resources, American Indian tribes are experiencing high rates of infection and death caused by COVID-19. A new website (https://un-declaration.narf.org/) developed by the Native American Rights Fund (NARF) and the University of Colorado Law School provides resources to help promote the rights of indigenous peoples.

As some states persist in attacking the ability of tribal governments to protect their members from this and other threats to self-determination, culture, land, and welfare, it is more important than ever to protect indigenous peoples’ rights.

The website gathers key resources for tribes and communities, including a United Nations statement regarding the protection of indigenous peoples during COVID-19 and Colorado Law’s 2019 Report on Implementing the UN Declaration on the Rights of Indigenous Peoples in the United States.

The site will be an interactive platform for education and training to address not only challenges presented by COVID-19, but also opportunities to implement the UN Declaration on the Rights of Indigenous Peoples more broadly.

The Declaration is a worldwide standard-setting document recognizing the individual and collective rights of indigenous peoples, including self-determination and equality. The United States expressed its support for the Declaration in 2010, but implementation has been lacking.

In addition to making information available on the website, Colorado Law faculty and students together with NARF attorneys, in close collaboration with tribes and experts, will develop strategies for realizing the promises of the Declaration in the daily lives American Indian, Alaska Native, and Native Hawaiian peoples.

While some tribes have already passed legislation adopting the Declaration, others have used it in advocacy strategies. “The Declaration is key to protecting the tribal right to exist as peoples and to underscoring our responsibilities to tribal ways of life,” said project partner Judge Greg Bigler, a Euchee tribal member.

March 2019: Conference to advance the promises of the UN Declaration on the Rights of Indigenous Peoples and develop a strategy for its implementation in the United States

“The Declaration envisions a future in which the countries of the world embrace and uplift indigenous peoples on fair and equitable terms with effective recognition of their rights to exist as distinct peoples in harmony with the societies that have grown up around them, free from social and economic disparities rooted in histories of mistreatment.”

The conference included discussions on challenges in Federal Indian Law, the role of international human rights in advocacy efforts, cultural rights, climate change and environmental advocacy, business and entrepreneurship, Indian child welfare, as well as technology and communications.Recordings of the conference sessions are available from the NARF YouTube channel.

11:30-12:15     Keynote Address and Coen Lecture: Why Do We Need a United Nations Declaration on the Rights of Indigenous Peoples?

Related: Read more about NARF’s work with indigenous people at the United Nations.