Home / Our Work / Wearing Eagle Feathers and Regalia at Graduation 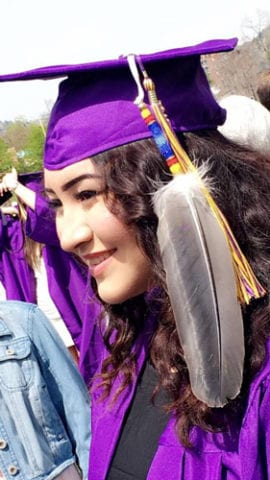 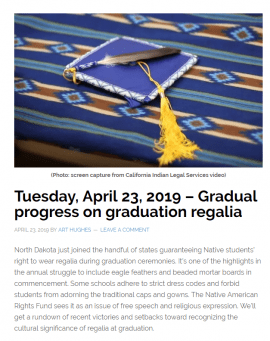 Many Native communities consider eagles to be spiritually significant. They believe that, as eagles roam the sky, they have a special connection with God. Their feathers represent honesty, truth, majesty, strength, courage, wisdom, power, and freedom. The United States government has long recognized the importance of eagles for Native religious and spiritual beliefs. In these communities, eagle feathers are given to individuals to mark and honor significant life accomplishments, such as graduation.

Unfortunately, a handful of school districts persist in restricting Native American religious liberty and viewpoints. This singling out of Native students puts them in the position of having to choose between participating in the celebration of a great accomplishment with their classmates or following their Native religious and cultural traditions.

Brochures for Students and Schools:

The Tribal Education Department National Assembly (TEDNA) and NARF are proud to distribute two flyers to assist students and families in their quests to wear eagle feathers at their graduation ceremonies. Wearing Eagle Feathers at Graduation: A Guide for Students and Families serves to provide guidance on how to work with school districts to make the request. Wearing Eagle Feathers at Graduation: Information for Schools teaches schools about the significance eagle feathers and plumes hold for graduating students.

The U.S. Constitution’s Free Exercise Clause protects religious practices and recognize the exercise of religion as an unalienable right. The Free Speech Clause of the Constitution also protects the right to free speech. Wearing an eagle feather or regalia to show academic success and religious beliefs should be considered protected practices, and Native students should not be singled out for unique treatment.